The Lexus RX and the Toyota Highlander seem similar on paper. The two SUVs are similar in size, and use some similar powertrains. They’re both tall, large, SUVs that seat lots of people and can be ordered in two or all-wheel drive. While the new 2023 RX and 2023 Highlander are related, they’re not the same.

The new 2023 Lexus RX is not based on a Highlander

For 2023 Lexus redesigned the RX completely. It’s part of Lexus’s new goal of making less boring SUVs and cars, and with the new 367 horsepower RX 500h F Sport Performance version, it’s likely succeeding. It uses the latest version of Toyota’s GA-K platform, which is shared with the RAV4.

The Highlander was last all new for the 2019 model year. The Highlander, however, is built on the closely-related but different TNGA-K Platform. This is shared with some cars and larger SUVs. Both platforms, which underpin a wide variety of Toyota and Lexus vehicles, are designed for a multitude of different uses, but keep costs down. The upcoming Lexus TX will be share more with the Highlander than the RX.

For 2023, the RX and Highlander are two different vehicles 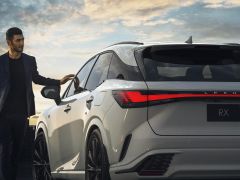 Can the New 2023 Lexus RX Hold on to the Best-Selling Midsize Luxury SUV Crown?

Previous generations of the Highlander and RX were more closely related than the current two. The new RX is completely different for 2023, while the Highlander carries on with just a few changes for 2023.  For 2023 the Highlander will get a more refined engine. Instead of the old V6, it has a new turbocharged four-cylinder with  265 horsepower. Though it’s down on horsepower, its torque increase means more power as you tip into the go pedal. It also means that the Highlander can tow up to 5,000 pounds.

In Platinum trim, though, the Highlander’s $49,075 price certainly puts it in Lexus RX territory. But, the Highlander does have one major advantage over the RX: the highlander has seating for seven people. For 2023, too, the Grand Highlander will debut, which is an even longer version that adds some critical room in the back so real adults can use the third row. The Highlander Hybrid trim is popular, too, and it accounts for 25% of Highlander sales, according to Forbes.

Lexus redesigned the RX for 2023 with new sheet metal and more. Lexus is making the RX a more performance-oriented SUV. For the first time, Lexus will make an RX500h F Sport version of the RX. The new 500h combines a 2.4-liter turbocharged gas engine with two electric motors, one in the front and one in the back. F is Lexus’s performance trim.

The result is 367 horsepower and a 0-60 miles-per-hour time of 5.9 seconds. The F Sport also adds Lexus’s high-performance Adaptive Variable Suspension and a new all-wheel drive system. But there will also be some more pedestrian (and affordable) versions, including the RX 350 and 350H, or hybrid, version.