The Subaru WRX is by far one of the most popular sports sedans ever produced. It’s hard to deny a practical four-door with an all-wheel-drivetrain and a turbocharged engine. In fact, that’s a recipe for daily driver success. However, not all Subaru WRX model years are equal. Let’s take a closer look at the five best WRX model years to consider should you be in the market.

The 2015 model year marked a new generation for the venerable Subaru WRX. It featured a stiffer chassis, a slightly roomier cabin, and more power. That additional power came from an all-new turbocharged 2.0-liter four-cylinder engine that replaced the previous 2.5-liter powerplant. Although it was down on displacement, the new engine produced 268 hp and 258 lb-ft of torque – which was 3 more horsepower and 14 more lb-ft than the outgoing model.

According to Edmunds, this new iteration of the WRX was able to get up to 60 mph from a standstill in 5.9 seconds, which is quick for a car in its price range. If you’re searching for a 2015 WRX, you can expect to pay anywhere from $15,000 to $25,000, depending on the car’s condition and location. However, it’s worth noting that J.D. Power scored it a low 2 out of 5 for reliability, so be sure to get a pre-purchase inspection done before buying one.

The 2018 Subaru WRX was a refreshed model year

For 2018, the Subaru WRX underwent a minor refresh. According to Vehicle History, the 2018 model had the same 268-hp turbocharged engine as the 2015-2017 models but received a few noticeable mechanical upgrades. These upgrades included electronic power steering, a revised suspension, and a newly designed synchromesh six-speed manual transmission.

The car also received a new front grille and other cosmetic changes, as well as more sound deadening to quiet the cabin. However, Edmunds noted that the cabin noise was still “excessive and tiresome” despite the added padding. Nonetheless, the 2018 WRX carried on the swift and nimble daily driving characteristics the car has always been known for.

The 2002 Subaru WRX is the one that started it all

The 2002 Subaru WRX didn’t mean the start of the nameplate in general, but it was the first model year offered in the U.S. market. Back then, the spritely sedan was powered by a turbocharged 2.0-liter engine that produced 227 hp. The powerplant was mated to a five-speed manual transmission that routed the power to all four wheels via the car’s Symmetrical AWD system.

In terms of reliability, there are many 2002 WRX owners on Edmunds that vouch for the car’s dependability and driving enjoyment. The site rates this vintage of the WRX with a 4.6 out of 5 for reliability.

For the 2004 model year, Subaru updated the WRX with a new front fascia. Everything was the same underneath the hood, which meant it still had a 227-hp turbocharged engine. However, those seeking more would be delighted with the all-new Subaru WRX STI model that came out during this model year.

The WRX STI featured a more prominent hood scoop, a big wing, and other aero enhancements over the standard WRX trim level. It was also powered by a 300-hp, turbocharged 2.5-liter engine that received much praise from critics. Edmunds even gave it a 4.7 out of 5 stars when they reviewed it. 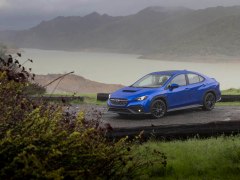 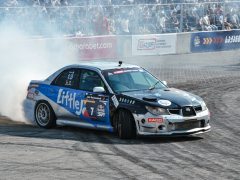 Can You Drift a Subaru WRX?

The 2006-2007 Subaru WRX received a few styling tweaks, including a new grille and headlights. The rear end was revised too. However, the most significant upgrade was the increase in engine displacement from 2.0 liters to 2.5 liters. This bump in size resulted in three more horsepower and 18 more lb-ft of torque. Other mechanical upgrades included larger brakes, a faster steering ratio, and shorter shift throws from the five-speed manual transmission.

To add to this generation of the Subaru WRX’s appeal among fans, this was the model used in the movie “Baby Driver.” However, don’t get any ideas as far as robbing a bank; you might not be able to outrun the law in one of these cars despite the mechanical upgrades.

What’s the best year for the WRX?

If you’re looking for the best Subaru WRX model year, we advocate for the 2018 version. The 2018 model year has the most upgraded engine version, the most sound deadening, and the most tech-savvy features among the other model years on this list. However, if you’re looking for a WRX that will better fit a tighter budget, the older models will work as well.