Before there were the Ford Maverick and Hyundai Santa Cruz pickup trucks, there was a Subaru Baja. The Baja was manufactured from 2002 until 2006, and ultimately it was a bit of a flop. But, with the resurgence of compact pickup trucks, could now be the time for Subaru to bring back the Baja in modern form?

Why was the Subaru Baja discontinued?

Because the Baja was not a good seller, Subaru decided to cancel its small truck in 2006. At the time, it was fairly pricey but did not offer the kind of equipment that consumers expected for its MSRP.

When all was said and done, Subaru made 30,000 Bajas. And even after it was discontinued, there were still some Subaru trucks sitting at dealerships. For whatever reason, the Baja just didn’t resonate with the buying public. However, it appears the market has now changed. And maybe a quirky small truck from Subaru could do well.

A new Baja would have standard AWD

If you are familiar with the Subaru brand, you know that most of its vehicles come standard with AWD. This means you get power going to all four wheels with an even 50/50 split. Currently, small trucks like the Ford Maverick and Hyundai Santa Cruz do offer AWD. But it’s an option that you have to pay extra for.

Plus, Subaru vehicles are designed from the ground up to come with the feature. This can improve the overall functionality of AWD. Plus, you don’t have to worry about paying an additional cost for it.

A Subaru truck would be quirky

There no getting around it; the Subaru Baja is a quirky truck. It looks funny, and the interior is filled with weird little features. The Baja might not have been especially practical, but that hasn’t stopped folks from buying a vehicle in the past.

According to some potential renderings on Carscoops, it is unlikely that a new Subaru truck would look all that weird. It kind of evokes the look of the Santa Cruz, which has sharp lines.

In a world filled with oversized pickup trucks, the more small trucks, the better. These models offer better fuel economy, are practical for urban environments, and they are cheaper. With the average new truck transaction costing over $60k, being able to get the utility of a pickup for less than $30k is a great thing. 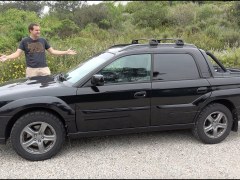 The Subaru Baja Turbo Is One of the Weirdest Trucks Ever 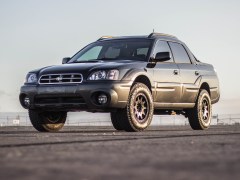 Can the Honda Ridgeline Scratch The Subaru Baja Itch?

Sure, you might forego some capability. But, according to The Drive, most truck owners don’t actually do truck stuff. Meaning actually hauling and towing things with a truck is fairly rare.

So, why pay more for capability you aren’t actually going to use? Well, America is a free country, and if we want excess, we can have it. But it is nice to have a truck that is priced like an economy car, even if a new Subaru pickup would probably be more expensive than something like a Ford Maverick.