The Toyota Camry is the automaker’s most popular sedan thanks to its fuel economy, reliability, safety, and trim options. Drivers can choose from more budget-minded basic trims to sporty, powerful trims with upgraded amenities. So, what’s a good Camry model year to consider? Here’s what you need to know about the 2005 Toyota Camry:

Though it has average styling for a used Toyota, the 2005 Camry makes up for that with a combination of bulletproof reliability, quality, user-friendliness, and refined powertrains, according to MotorTrend reviewers.

There are multiple configurations for the 2005 Toyota Camry: the sedan, Solara coupe, and convertible. This makes for a slightly confusing fleet of trim options. The used Camry sedan comes in four trim options: the base, LE, SE, and XLE. The Camry coupes are SE, SE Sport, and SLE trims, and the convertibles are only the SE or SLE trim with specific engines.

The base 2.4-liter four-cylinder engine produces 160 horsepower and 163 lb-ft of torque. A 3.0-liter V6 powertrain is also available and generates 210 hp and 220 lb-ft of torque. The base sedan comes with the base four-cylinder engine, but the V6 is available for the LE, SE, and XLE trims. The V6 is the only option for the convertibles, and both powertrains are optional for the coupe builds.

Although it’s an older used car, plenty of standard features on the 2005 Camry hold up. Remote trunk release, remote entry, steering wheel audio and cruise controls, and heated mirrors come standard, per Edmunds. Additionally, the front and back seats have similar head and legroom measurements compared to the latest Camry models.

Common complaints with the 2005 Toyota Camry 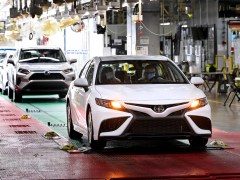 CarComplaints data shows there isn’t one specific problem to watch out for with the used Toyota Camry. The most common category was electrical problems (20 out of 125), ahead of interior accessories (18) and brakes and steering problems (16 each). The most common issue on record with CarComplaints was brakes not stopping the vehicle, which was reported nine times at around 85,000 miles. The typical repair cost was estimated at $5,000.

Five total recalls have been issued by the National Highway Traffic Safety Administration (NHTSA) for the 2005 Toyota Camry. The first recall concerned the seatbelt buckle status switch issued in December 2004. Later recalls were two problems with load-carrying capacity labels, an issue with the crankshaft pulley detaching from the belt for the power steering pump, and potential short-circuiting of the seat heater electrical wiring that could increase the risk of a fire. The last recall was issued in June 2016.

If you’re looking for a reliable used car, this used Toyota Camry is a good choice. MotorTrend reviewers say it has a “pleasant, innocuous way of getting from point A to point B.” Though the V6 engines provide more power, it’s not exactly a sporty ride for driving enthusiasts. The 2005 Toyota Camry continues the legacy of reliability and options for almost any driver. Kelley Blue Book (KBB) pricing shows the starting cost of this used Camry at $5,860. That is comparable to the Honda Accord ($5,903) and a bit more than the Hyundai Sonata ($4,368).