Most of us remember the announcement that California would move away from gas-powered vehicles and only allow electric cars to be sold in the state by 2035. The same week as this announcement occurred, an announcement to request EV drivers not charge their vehicles at specific times of day caused some twisted reporting of the facts. Of course, we’re in the infancy of EVs, making us wonder if electric cars could crash the electric grid.

Those opposed to EVs took the request by California out of context and spun it to sound like a doomsday scenario. As Forbes reports, elected officials in California simply asked EV owners to avoid charging their vehicles during peak hours, typically between 4 pm and 9 pm when most homes require their air conditioning units to operate the most.

No electric cars were left sitting on the side of the highway without any juice unless the owner was simply negligent. EV owners were more than welcome to charge their cars overnight, which most do anyway.

How much time do we still have with gas-powered cars?

Although some states have already set a hard date to end sales of non-EVs, not all states have done this. Even if every state transitioned to selling only electric cars by 2035, gas and diesel-powered vehicles would still be on the road. Forbes also tells us this would put an estimated time of only seeing EVs on the road in 2050 at the earliest. Considering it’s only 2023, that means 27 more years of oil-burning cars.

Are authorities in California and New York concerned about more electric cars on the road?

InsideEVs shared the video from State of Charge. This video is an interview with California and New York authorities regarding the movement toward electric cars. Both states have set a hard end to selling gas-powered vehicles in 2035. The two experts interviewed both explained their respective states are ready for any challenges regarding more EVs on the road. Electric vehicles are the future of driving. These two highly populated states are prepared for the increased load on the electric grid.

How much additional power is required to support the growing number of electric vehicles?

Forbes estimates that the power output would need to increase across the board by about 20%. This increase wouldn’t be necessary until around 2050. The US power grid increased total energy output by 20% in the last 30 years. The necessary increase is certainly within the realm of possibilities.

How often do most electric car owners need to recharge their cars?

Statistics show the average US car drives less than 40 miles per day. Most EVs on the road today can reach nearly 300 miles of EV driving range before recharging. This means many EV drivers could charge their cars once every five to six days and still have some electric charge in the battery. If this is true, there shouldn’t be too much of an additional draw on the electric grid over the next few years.

Next, check out the EV charging work by scientists in Idaho, or watch the video interview below from State of Charge. This interview covers the impact of electric cars on the electric grid. Be warned, this is a long video. 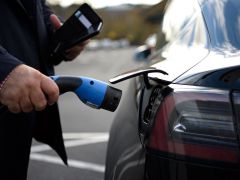 Are We Being Lied to About Electric Cars?