YouTube personality Doug DeMuro is many enthusiasts’ favorite internet car nerd. He seems to find the weirdest cars and gives his own take on all of their quirks and features in his YouTube videos. But he also reviews new cars, trucks and SUVs, and he recently got his hands on a pre-production version of the new Chevy Blazer EV. What did DeMuro think?

The Chevy Blazer EV is expected to debut later this year as a 2024 model for Chevy. It will be the brand’s first large EV SUV and promises room for five with plenty of cargo space in back. Most of the specs have not been released, but DeMuro says it’s larger than the standard Blazer he’s reviewed. The SS version in the video will be the top-of-the-line Blazer, which means it’s fully equipped and has all-wheel drive with up to 560 horsepower.

GM is using one platform, with some tweaks, to make pretty much every EV. From the Cadillac Lyriq to the new Sierra EV pickup truck, each has a tweaked version of an electric skateboard underneath. GM’s electric skateboard platform can be configured in several ways.

In the video DeMuro makes a big deal of the new EV’s styling. He talks about the long wheelbase, as well as how the charge port’s hidden secret port in front of the driver’s door. Designers can put an EV’s wheels anywhere, including at the far corners of a vehicle. When he compares the EV version and the new gas-powered versions, you can quickly see how the designers stretched the EV’s wheelbase to maximize interior room.

The rear bumper has a diffuser-like look to it, like the Corvette, as well as a large flat front end. Like on the Silverado EV, the E in Blazer is simply three blue bars. Demuro’s videos complement GM’s own videos.

Only a couple videos of the Blazer EV are floating around. DeMuro’s is the first time we can see, and get commentary on, the interior. Inside, it has a lot of familiar design cues. It has turbine-like circular vents that will be instantly familiar to any Camaro owner.

It has a real knob! The radio has a knob for the volume, which makes turning down music easy without taking your eyes off the road. The climate controls are buttons, too. Many of us hate having to go through touchscreen menus while driving just to find a fan-level switch. The Blazer’s buttons make that easy.

Like your grandfather’s Buick, the shifter is on the steering column, which saves room in the center console. The SS version has charge ports and a full panoramic sunroof. It should start at about $45,000 in LT trim. 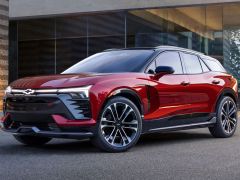 Blazer or Equinox? Which Chevy EV SUV Should You Wait For?

Demuro usually drives vehicles he reviews at the end of his reviews. Unfortunately, Chevy didn’t let him drive the pre-production version of the Blazer EV. So, we will have to wait to get a Doug Score for some time. We know it will have 560 horsepower and 650 lb-ft of torque on tap to beat rivals from Tesla and Ford.

You can order it in front-wheel drive or all-wheel drive, unless you happen to be a police officer, and in that case, it comes in rear-wheel drive. Its range is expected to be 320 miles for the regular versions. SS Blazers with a different battery pack will only get 290 miles between charges. Speaking of charging, with DC Fast charging, you can expect 78 miles of range per 10 minutes of charging (if you can find a fast charger).