In an announcement earlier this week, Porsche delighted fans with an expanded lineup of modern head units for older cars. The Porsche infotainment upgrade now includes some of their most popular models from the early and mid-00s. It means you can now have Apple CarPlay and Android Auto in your 997 911, 987 Cayman and Boxster, and some of the earlier Porsche Cayenne SUVs.

A Porsche infotainment upgrade that looks like the original

While each replacement head unit is designed to look just like what you have now, you’ll enjoy additional functions for the modern age. It turns out that Apple CarPlay and Android Auto are just the beginning of what you can expect.

The new Porsche Classic Communication Management system will also include modern navigation and SiriusXM capability to ensure greater connectivity while on the road. You’ll also get a built-in trip computer for tracking your journey. Each new PCCM unit will come with a seven-inch touchscreen display that fits perfectly into your older Porsche stereo location.

Where to get the new Porsche Classic Communication Management system

You can visit any Porsche dealership to buy a new PCCM Plus system. These Porsche infotainment upgrades carry a price tag of $1475.99 and can be installed at any authorized dealership. You can also choose your favorite Porsche Classic Partner workshop for installation to keep the warranty of your new system intact.

Which Porsche models get upgraded infotainment? 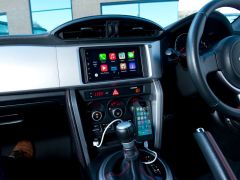 How to Add Apple CarPlay to an Older Car

This latest news is simply an expansion of the Porsche Classic Communication Management system’s list of capable models. The latest update will include Cayman, Boxster, and 911 models from 2005 to 2008. You can also equip the system to Porsche Cayenne models from 2003 to 2008.

Preexisting PCCM systems were developed for air-cooled 911s beginning in 2015. By 2020, they had updated the program to PCCM Plus, the first to include Apple CarPlay and Android Auto. This system was initially developed for 996-era 911 models as well as 986 Porsche Boxsters. Now, demand has induced an expansion of these retrofits to include more modern Porsche classics. The director of Porsche Classic, Ulrike Lutz said in a statement, “There is huge demand for contemporary networking of our timeless classics. And soon after the successful launch of the infotainment systems for retrofitting, we received corresponding queries from owners of early 911 generation 997. This is why we’re now significantly extending our range of Porsche Classic Communication Management Plus devices for retrofitting.”

What older Porsche infotainment upgrades are coming next?

There is no official statement regarding which Porsche infotainment upgrades will be the next to release. With air-cooled and mid-00’s sports cars and SUVs covered, we wouldn’t be surprised to see Porsche close the gap. Porsche didn’t begin offering Apple CarPlay on factory cars until 2017. That means there is a nine-year gap in which you can’t get CarPlay or Android Auto from Porsche. We expect that to change in the coming years, with 911s, Panameras, Macans, and Caymans from the era getting a PCCM Plus upgrade.