Why haven’t we seen a Camaro Z/28 since 2015? For some reason, the sixth-generation version didn’t make room for the iconic nameplate. Before the development of the latest 2023 Chevy Camaro ZL1, rumors were swirling that a Z/28 could be lurking. That muscle car might use the same elements found in the Cadillac CT5-V Blackwing. Unfortunately, it never happened.

What put the 2023 Chevy Camaro ZL1 in the crosshairs?

We’ve been looking for more power since Chevy saw fit to put 650 horsepower under the hood of the Chevy Camaro ZL1 1LE with a track package. This amazing muscle car lapped Nürburgring faster than any muscle car before it, grabbing the attention of many European boutique automakers. The incredible speed and power of the Chevy muscle car made us wonder what was next for this nameplate.

Where did the rumors come from for a Blackwing-inspired Camaro Z/28?

Although we haven’t seen the Z/28 version of the Camaro for a few years, the creation of the Cadillac CT5-V Blackwing showed up using the same supercharged 6.2-liter LT4 V8 engine as the Camaro ZL1. MotorTrend told us in August 2021 the Camaro could use the same tuning to offer a new Z/28.

The Blackwing offers more power at 668 horsepower and has the GM MagneRide suspension and optional Brembo carbon ceramic brakes. These are the only performance items missing from the Chevy Camaro ZL1.

The short timeframe made sense for a Z/28 release

The fifth generation of the Camaro Z/28 was only offered for 2014 and 2015 before Chevy turned to its sixth-generation version of this muscle car. The 2024 model year will be the final year of the current model of the Camaro, which would have made 2023 the right year to release the next version of this lauded nameplate, but it never happened.

How much power does the 2023 Chevy Camaro offer?

Now that we’ve discussed a rumor that never came to fruition, how much power does this muscle car offer? There are four powertrains found in the Camaro lineup. All models come with a standard 6-speed manual transmission, offering an old-school feeling. The base engine has an optional 8-speed automatic transmission, while the other engines offer an optional 10-speed automatic.

The engines and associated trims are:

LS and LT Trims (base engine)

Every Chevy Camaro is eligible for the 1LE Track Performance Package

The 1LE Track Performance Package turns this mean beast into a true monster. Regardless of powertrain, you can add this package to your Chevy Camaro. This package includes:

Which version of the 2023 Chevy Camaro is the best?

Car and Driver nods to the Chevy Camaro SS with the optional 1LE Track Performance Package. This brings the appearance items you’ll love, a naturally-aspirated V8 engine and a set of Recaro front sport seats. This could be the best way to experience the muscle car roots of this classic nameplate.

Next, check out a few of Tim Allen’s hot sports cars, or learn more about the 2023 Chevy Camaro ZL1 in this video below: 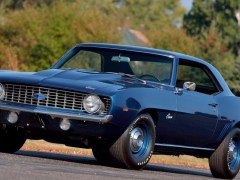