The most powerful Aston Martin ever

While the era of the V12 is sadly coming to an end, the Aston Martin DBS 770 Ultimate provides one more reason to love the platform. A 5.2-liter displacement and twin-turbo aspiration push the last DBS to 759 horsepower and 664 pound-feet of torque. It sends that power through an eight-speed ZF automatic transmission, and takes the DBS from stationary to 60 mph in just 3.3 seconds. You’ll reach 100 mph in less time than it takes to read this sentence, hitting triple digits in just 6.4 seconds. Top speed? Head to a track and this DBS will hurtle you along at up to 211 mph.

Of course, what goes up must come down, so the DBS 770 Ultimate gets improved brakes to match the extra grunt from up front. Carbon-ceramic brakes with six-piston front calipers and four-piston rear grabbers will help you get all that power under control. Special Pirelli P-Zero tires are attached to the DBS as well. They’ll be wrapped around stunning 21-inch wheels with a sophisticated spoke pattern. That said, you may want to have a detailer ready. This complex wheel design won’t be fun to keep clean. 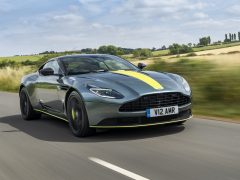 It seems as though the DBS 770 Ultimate is the last bastion for a few longstanding automotive pillars. The V12 gets a fitting end, going out with a bang that only this team of Brits could pull off. That James Bond-level hubris is shown off in the design of the final DBS as well. Not content with shoving over 750 horsepower from the engine, the stuff inside the DBS gets an upgrade for this final version.

Semi-aniline leather and Alcantara wrap the sport seats inside the latest Aston Martin DBS 770 Ultimate. Meanwhile, carbon-fiber shift paddles remind you that nothing was left on the table here. Available as both a coupe or convertible, just 499 total models of the DBS 770 Ultimate will roll off the production line.

Can you daily drive an Aston Martin DBS?

If you can find one, you can certainly daily drive the Aston Martin DBS every day. An upscale cabin makes even standard DBS models enjoyable to drive. Just keep in mind the mid-six-figure price tag if you’re planning on taking it out in a downpour. That said, those looking for the DBS 770 Ultimate may find themselves disappointed. According to U.S. News, the 499 planned models have already been sold, though don’t be surprised to see a few to hit the secondary market shortly after delivery.

What’s next for Aston Martin?

Aston Martin has some big plans to follow-up the DBS, including a V8-hybrid hypercar dubbed Valhalla. Meanwhile, a preview for a new Vanquish broke cover and is slated for a 2025 release. As for now, we say goodbye to the V12 and the DBS at once, in hopes we someday meet again.