The Honda Civic is one of the most popular cars in the U.S. For the last six years, it’s been the best-selling compact passenger car in America. Per GoodCarBadCar data, at least 260,000 units have been sold yearly since 2012. That means plenty of Civic compact cars, both brand new and used, are on the road and available today. They’re also considered one of the most reliable cars in Honda’s lineup, and many generations are good options on the used market, including the 2014 Honda Civic. In fact, it’s a standout used car thanks to its fuel economy, value, and low price. Per Kelley Blue Book (KBB), a 2014 Honda Civic starts at $10,472.

But the compact car segment is a crowded one. There are other options for used cars besides the Honda Civic. Here are a few competitors worth considering:

The 2014 Hyundai Elantra is a Honda Civic alternative

The Hyundai Elantra was redesigned for the 2014 model year with upgrades inside and out. An upgraded infotainment system, a quieter cabin, and a more powerful engine all make the Elantra a good choice. Like the Civic, the Elantra also comes in multiple setups, including coupe, sedan, and hatchback options.

It has comparable base engine specs to the 2014 Civic: 145 horsepower to 143 in the Civic and 130 lb-ft of torque to the Civic’s 129. According to The Car Connection, the upgrades inside make the 2014 Elantra more comfortable than its predecessors. It also feels more spacious, with lots of cubbies and storage bins to store whatever you may need. The National Highway Traffic Safety Administration (NHTSA) also rated it five stars for safety, and the Insurance Institute for Highway Safety (IIHS) named it a Top Safety Pick.

The Elantra comes in at a lower starting price than the Civic. There are standard features you can get with Civic you can’t find on the Elantra, including standard Bluetooth streaming, smartphone interfacing, and steering wheel controls. But the Elantra also offers drivers heated mirrors and hill start assist standard, which the Civic does not include on all models. Though it’s not as sporty a drive as the Civic, the Elantra is a great value choice with plenty of standard features and great safety ratings.

The Kia Forte was redesigned in 2014 as well. The Car Connection reviewers tout the more modern look with its confident stance, distinctive cockpit, and smart detailing. It has less interior space than the prior generation due to a lower roofline, affecting headroom in the back seats. Reviewers note the ride is firmer than some competitors but strikes a good balance of also absorbing bumps in the road.

It has a slight edge on the Civic in power with 148 horsepower and 131 lb-ft of torque in the base 1.8-liter powertrain. It matches many of the Civic’s standard features like Bluetooth streaming and goes beyond with satellite radio and heated mirrors but falls short in others. Optional features on the Forte, like cruise control, keyless entry, and remote trunk release, are all standard on the Civic.

According to The Car Connection reviewers, the biggest drawback to the Forte is safety. The NHTSA gave it a three-star rating for front impacts and four stars overall. The IIHS gave the Forte ‘poor’ ratings in the small overlap front test. Like the Elantra, it’s a less expensive option for a stylish alternative to the 2014 Honda Civic. Though it is almost as fun to drive, it falls short on standard features and safety.

The Mazda3’s major redesign for 2014 sees the sedan more resemble present-day Mazda models. It may be the most stylish used car on this list. But that design does come with a compromise inside. The Car Connection reviewers say the cabin is both tight and noisy and the setup in the back seats “makes it one of the more claustrophobic small-car experiences.”

The biggest pro to the Mazda3 is what you experience in the driver’s seat. The base 2.0-liter engine has the edge over the 2014 Civic with 155 horsepower and 150 lb-ft of torque with the same mileage figures. New steering and suspension systems were created around the upgraded Skyactiv engine, and the results are excellent. Reviewers call the Mazda3’s performance satisfying and more responsive than other cars in the class. Safety-wise, the Mazda3 was an IIHS Top Safety Pick+ and earned five-star ratings in all NHTSA tests.

Some standard features on the 2014 Honda Civic are not for the Mazda3, including cruise control and Bluetooth streaming audio. But for nearly $2,000 less than the starting price of a used Honda Civic, the Mazda3 is a safe, efficient, sporty choice.

The 2014 Toyota Corolla is a best-selling compact car

The Corolla continues the trend of redesigned compact sedans with a new look for 2014. It’s the only model on this list to come close to the Civic in sales, too. Per GoodCarBadCar, nearly 340,000 units were sold in 2014, so there are plenty of models to be had on the used market.

The Car Connection reviewers detail that the redesigned Corolla has a roomier interior in the front, a quieter cabin, and a better ride compared to prior generations. The back seats do lack headroom for taller passengers, though. The base model Corolla is down on power compared to the Civic at 132 horsepower and 128 lb-ft of torque. Reviewers recommend steering clear of the base model due to its slow acceleration.

As far as safety goes, the Corolla keeps pace with the Civic. The IIHS named it a Top Safety Pick, and the NHTSA gave it five stars. Driver aids like the Smart Stop system, electronic stability control, and plenty of airbags make it one of the safest choices on this list. But features like cruise control, remote entry, and remote trunk release are not available on the Corolla like on the Civic.

The 2014 Volkswagen Jetta is a safe Honda Civic alternative 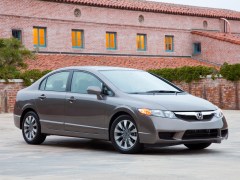 The Volkswagen Jetta was a few years away from a redesign in 2014, and the result is a compact sedan that’s underpowered and conservative compared to the others on this list. The Car Connection reviewers tout its simplicity inside and out with easy-to-understand controls. There’s plenty of space for passengers in the back seats and a large trunk compared to others in its class.

Under the hood, the Jetta has the weakest powertrain on this list. The base 2.0-liter four-cylinder engine produces just 115 horsepower and 125 lb-ft of torque. Reviewers recommend skipping the base engine and upgrading to a higher trim if you’re looking at this used car. Once you do, reviewers say the upgraded suspension gives you a precise, responsive ride on par or better than the Civic.

Ratings from the IIHS and NHTSA make it one of the safest compact sedans on offer. The former named it a Top Safety Pick, and the latter gives the Jetta a five-star rating like the Civic and Corolla. A big plus is the outward visibility compared to the Elantra. Features-wise, base Jetta models lack cruise control, remote entry, and Bluetooth streaming audio.

Which used Honda Civic alternative is the best?

All of these used cars are good alternatives for the 2014 Honda Civic in their own ways. If price is the primary concern, the Forte and Jetta are both low-cost options, but the Forte likely will give you a better driving experience from the base model. For buyers looking for great safety ratings, most of these used cars are great choices, but the Corolla stands out with aids and a great reputation. The Mazda3 is the best pick if you’re looking for a sporty driving experience on par with the Civic’s.