With new and used cars currently being sold for record-high prices, many consumers are looking to the private seller marketplace to find a deal on an older car to drive until prices come back down to earth. For many buyers, one brand is an obvious choice for an older vehicle; Toyota. Toyota has solidified itself over the years as a champion of reliability and longevity due to its over-engineering to ensure that its cars have a huge lifespan.

Toyota’s mid-size family sedan, the Camry, has been a beacon of reliability for Toyota. With over 400,000 Camrys produced in the 2005 model year, many fine examples are still on the road today, available for purchase. Here are three reasons to choose the 2005 Toyota Camry, as well as a couple of reasons you might be better off skipping this model year.

Unparalleled reliability of the Toyota Camry

As previously mentioned, the Toyota Camry is one of the most historically reliable cars ever built. According to Consumer Reports, the first issue that Camrys tend to have throughout ownership deals with paint and interior trim pieces deteriorating over time due to their age. It is well-known that every model of Toyota Camry typically drives upwards of 200,000 miles before any major repair is needed, outlasting most, if not all, of the competition for this model year.

Fantastic engines to choose from

When the Toyota Camry was first introduced to the American marketplace in the 1980s, there was not a ton of variety when it came to the engine choices under the hood. For the first-generation Camry, you had a choice of three small, four-cylinder engines, one of which was a turbodiesel. However, for the 2005 model year, the Camry has two engine options to choose from, a four-cylinder base model engine producing around 160 horsepower, and an impressive V6 engine capable of around 225 horsepower and a 0-60 mph time of fewer than 9 seconds. While these numbers are impressive for mid-2000s economy car engines, they are even more impressive when considering just how long these engines last.

A plethora of features for an entry-level price

Even though the 2005 Toyota Camry is over 15 years old, there are still many features to make you feel comfortable in the cabin. According to Motor Trend, the 2005 Camry comes with a power front seat, climate control, a good sound system, and a ton of storage space, including a center console featuring a 12-volt power supply for charging your smartphone. There is another 12-volt power supply in the dashboard if you and a passenger need to charge a device at the same time.

Why you should skip the 2005 Camry 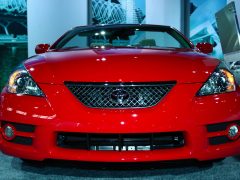 Even though the 2005 Toyota Camry does almost everything very well, a few issues with the used Camry may keep drivers away from this sedan. First, the Toyota Camry is boring. Now, this may not seem like a genuine reason to stay away from a car, but there is no hiding the fact that the 2005 Camry was built to be safe, inoffensive, practical, and not much else. While the V6 engine option does up the power slightly over the base four-cylinder, it is still uninspiring to drive for many.

Another issue with the 2005 Camry is that these cars are still expensive. Even though over 400,000 models were made for the 2005 model year, they are still in high demand, with Edmunds reporting that many 2005 Toyota Camrys are priced over $10,000 on the used market, putting this 15-year-old car in line price-wise with a few small city cars that are only a few years old.

Yes, the 2005 Toyota Camry is one of the best cars produced in recent years regarding reliability and longevity. Suppose you can find one being sold for a reasonable price by a private dealer, and you can tolerate the dull, uninspiring performance. In that case, you will have a safe and reliable car that will act as reliable transportation for you and your family for years to come.