We got our first preview of Ram‘s electric future with the automaker’s Revolution concept truck. This prototype EV showcases several ways an electric powertrain could change the shape and functionality of a pickup truck. One exciting feature is the truck-length “passhole” that allows you to load long items from the bed through the front trunk. The Ram Revolution, for example’s sake, could carry a small diameter telephone pole up to 18 feet long.

The Revolution EV concept is a uniquely-shaped Ram truck

The 2024 Ram 1500 Revolution is the first concept vehicle built on Stellantis’ skateboard-shaped electric chassis. It has a full truck frame with a 500-mile battery pack tucked between its frame rails. Two electric motors–one for each axle–are also attached to this frame.

This powertrain is much flatter and more compact than a traditional internal combustion engine/transmission/driveshaft/gas tank. As a result, Ram was able to reconfigure its Revolution and redefine what a pickup truck is.

Ram moved the Revolution’s firewall four inches further forward than on the current generation of 1500. This allows the electric truck to have both a full-size pickup bed and a massive cab with three rows of seating.

Ram is also pioneering a rail system for attaching its seats and cargo tie-downs, that spans the single loading floor from the front trunk (frunk) to the tailgate. Finally, it created both a fold-flat “mid-gate” between the cab and bed and a “passhole” opening between the cab and frunk. The result is an 18-foot storage area.

The Revolution EV could carry a telephone pole

Dropping the Ram Revolution’s mid-gate creates a continuous load floor from the tailgate to the firewall. You can slide the third-row jump seats, or even the second-row bucket seats back into the bed or forward to make more room. You can also unlatch and remove the center console. But you don’t have to stop there.

Can you picture the ski pass-throughs many sedans have? Fold-down openings in the rear seat to store a long item half in the trunk and half in the passenger compartment. Well, the Ram Revolution has one, but it’s in the firewall. When you open this passhole, you can pass a thin item from the cabin, forward to the frunk. This would be a great way to store skis. But you could store even longer items.

What 18-foot items could you carry in your Ram? Well, the front passhole is about one square foot, but rectangular in shape. So you could slide eighteen feet of pipes, lumber, or rebar into a Ram Revolution, then put the tailgate up. You could also strap in an even longer, but equally thin item if you leave the tailgate down.

Will you ever need to transport a single, thin telephone pole? Probably not. But it would be nifty to know you could if you wanted.

Will the Ram Revolution’s passhole make it into production?

The Ram 1500 Revolution that debuted at the Consumer Electronics Show is just a concept vehicle. According to parent company Stellantis, it won’t be the exact electric truck that goes into production in 2024.

As cool as the concept truck’s continuous load floor is, the production vehicle will probably have a carpeted cab. This means that you won’t want to slide especially dirty construction materials through the passhole.

But will the production Ram 1500 have a passhole between the cab and frunk? We bet it will. This sort of door has already proven a handy way to carry long items like skis in sedans. With the Ram Revolution’s glass roof, owners may be hesitant to strap skis up top.

Now, will the production Ram Revolution have a fold-flat midgate? We’ll just have to wait and find out.

Next learn about the electric Rivian R1T’s gear tunnel or see the Ram Revolution for yourself in the video below: 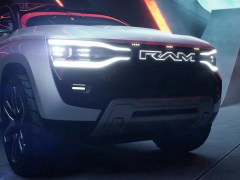 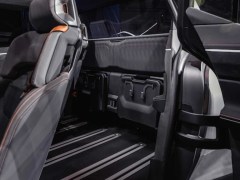 Remember Pickup Truck Jump Seats? Ram Is Bringing Them Back