The Tesla Model 3 is an enormously popular electric car, but did you ever hear about how it got its name? The story of its name, like many things in the world of Elon Musk, is bizarre. Find out why the Tesla Model 3 is called the 3. And in the strange mind of Musk, it has to do with an acronym that spells out “SEXY.”

How did the Tesla Model 3 get its name?

We’ll get the “3” part of the Tesla Model 3 name, but first, we’ll cover the “Tesla” part. The name Tesla Motors is a tribute to Nikola Tesla, the Serbian-American electrical engineer and inventor. Nikola Tesla had multiple ground-breaking inventions, but he is most known for inventing the alternating current (AC) electricity supply system. With Nikola’s importance to the development of the modern electrical system, it’s fitting that Musk chose Tesla as the name for his electric car company.

Musk wanted to call the Model 3 the ‘E’ to spell out ‘SEXY’ with four Tesla vehicles (Model S, E, X, and Y)

Elon Musk clearly has an affinity for unusual names. He and his ex-girlfriend, singer Grimes, named their son a confusing mix of characters: X Æ A-12. Also, there’s “Fart Mode” in Tesla electric cars, which blasts different fart sounds from the speaker systems. Some of the farts pay homage to Musk’s companies, such as “Falcon Heavy” and “Neurastink.”

For the Tesla Model 3 name, though, Musk went in a debaucherous direction. Originally, he wanted to call it the Model E. With the previously released Model S sports sedan and Model X SUV, this spells out “SEX.” Adding the Model Y crossover SUV spells out “SEXY.”

As detailed by InsideEVs, Musk told CNN Money about his naming plans in 2014:

“A friend asked me at a party, ‘What are you going to name the third-generation car?’ Well, we have the S and the X, so we might as well make it the E.”

Tesla applied for the trademark to the Model E name in 2010 but changed the name to the Model 3 in 2014. It made the change because Ford blocked the trademark application. One of the reasons for this action is Ford has long been protective of the Model T name, the first mass-produced car in America. It fights any other automotive company that uses car names that sound too close to the Model T.

Another reason for Ford blocking the Model E name application is the big automaker reorganized its operations to create a division solely for EVs — called “Ford Model e.” It has a separate “Ford Blue” division for internal combustion engine vehicles. 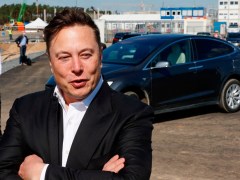 How Did Elon Musk Get the Name Tesla? — It’s a Weird Story

Also, Tesla uses three horizontal bars (☰) in its logo for the letter “E” — and the same for the number “3” in the Model 3 logo. Therefore, it reads the same either way (S☰XY). In the end, Musk’s “SEXY” dream with the Model S, 3, X, and Y came true.