You might not recognize the Hyundai Kona because it just got a significant glow-up. Every single feature of this compact SUV just got bigger and better. You may need to see it to believe it. Check out what’s new for the 2024 Hyundai Kona.

The 2024 Hyundai Kona just got remodeled to kick off its second generation. It has a sharp futuristic design that helps it fit in with other vehicles in the lineup, such as the incredibly popular Hyundai Ioniq 5.

You probably noticed the new headlights first. An LED bar stretches across the width of the grille. The headlights are encapsulated in black cladding that stretches around the bumper to frame the wheels.

The electric Hyundai Kona has a pixelated LED bar, like the Ioniq 5, and body-color wheel arches. It has larger taillights and another LED bar in the rear, with units incorporated into the wheel arches.

The N-Line is set apart with a black grille, black roof, and spoiler. It rides on 19-inch wheels with a more aggressive style.

Plus, the 2024 Kona grew. It’s now 5.9 inches longer than before, and the wheelbase added 2.4 inches. This should improve the passenger and cargo space. Also, it could enhance the Kona’s ride quality.

The official powertrain options for the 2024 Hyundai Kona haven’t been revealed. However, we know that a Kona Hybrid, Kona EV, and an N-Line variant are on the way.

The 2022 Hyundai Kona EV uses an electric motor and battery pack to generate 201 hp and 291 lb-ft of torque. It has an EPA-estimated range of 258 miles. These figures may increase for the 2024 Hyundai Kona EV. 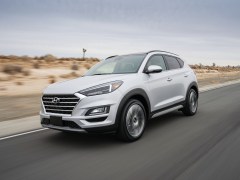 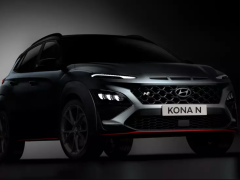 The 2024 Hyundai Kona interior should be larger, thanks to the extra length. The outgoing model features 19.2 cubic feet behind the second row and up to 458 cubes in total.

Plus, the layout was redesigned to provide an airy feeling and improves storage space. The gear selector was moved from the center console to behind the steering wheel.

You’ll notice that the 2024 Kona features larger screens. Two 12.3-inch screens combine to create the digital gauge cluster and infotainment system. It reminds us of the Hyundai Tucson setup.

There are HVAC controls and vents under the infotainment screen, but there’s only one physical knob. It’s unclear what it’s used for. The new Kona could have more touchscreen controls like other models in the lineup.

We will update you as soon as more details about the 2024 Hyundai Kona are released. Pricing information and specs are on the way. Until then, we know that the Kona is bigger, more attractive, and smarter.