Don’t let the similar names fool you. The 2023 Chevy Blazer and Chevy Trailblazer are two very different SUVs, with very different missions. They have some similarities: they’re both five-seat SUVs with ample cargo room, for example, but beyond that, these two don’t have much in common. But which is bigger, the Chevy Blazer or Trailblazer?

The Blazer is larger than the Trailblazer

Chevy introduced the Trailblazer in 2021, and the new Blazer in 2019. They’re both fairly new designs that haven’t changed much and don’t get much of an update for 2023, save for some minor cosmetics.

However, to maximize that room, the Trailblazer comes with a trick fold-flat front seat. Fold the seat, and you can stuff in some long 2x4s or, if you believe Chevy’s ads, a full-sizedcsurfboard.

The Blazer has a larger engine, too

The 2023 Chevy Blazer comes standard with a 193-horsepower four-cylinder. But, you can outfit the Blazer with an upgraded 227 horsepower 2.0-liter turbo-four cylinder, or a potent 308-horsepower 3.6-liter V6. Front-wheel drive is standard, while all-wheel drive is an option, and it’s expected to have solid reliability, according to Consumer Reports. The EV version of the Blazer will appear in 2024.

The Trailblazer’s engine options include 1.2-liter and 1.3-liter turbocharged engines. The 1.2-liter makes 137 horsepower, which gets the Trailblazer moving, but most will opt for the 1.3 that has 155 horsepower, as well as the option for all-wheel drive. The Trailblazer, though, does see much better fuel economy than the larger Blazer.

The Trailblazer has a much lower starting price 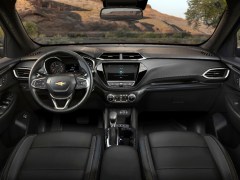 Take a Look Inside the New Chevy Trailblazer ACTIV Trim

The Blazer, though, starts at $35,100. Like the Trailblazer, the base version comes well equipped, but you’ll probably want to step up to the 3LT trim to get the goodies most want, like heated seats and parking sensors. The Blazer does come in a cool street-styled RS version, an appearance package that adds some ground-hugging bodywork.  On the Blazer, all-wheel drive is a $2,700 option.