The pickup truck wars aren’t just about towing, hauling, or who has the better interior packages. Sometimes, it’s just about size, and what you can fit in it. Pickups are, after all, work vehicles for people who need to carry lots, and lots, of stuff. Two of the most popular trucks are the Ram 1500 and the Chevy Silverado, so which is the largest truck?

Is a Ram larger than a Chevy?

The Ram offers a long bed option, which extends the stock 67-inch bed to a 76-inch bed. The beds on Ram tricks are 66.4 inches wide. Chevy, though, offers three bed lengths on the Silverado, a 66-inch standard bed, a 97-inch long bed, and a 68-inch short bed. Chevy sells the Silverado as a two-door regular cab model, with a two doors, and Ram only makes four-door trucks, which means Chevy can offer more bed options. Because of the bed length options, the Chevy can be longer, but they’re both about the same width.

Size isn’t all in these full-sized trucks

Sometimes size doesn’t matter. J.D. Power, for example, named the Ram 1500 No. 1 in Driver Appeal since its update in 2019, and the Ram’s interior is definitely a nice place to spend some time. Ram’s have a unique, for a big truck, anyway, independent rear suspension that gives these trucks a much smoother ride than the solid-axle trucks from Ford, Chevy, GMC or Nissan. For the last two generations Rams have also been able to boast some of the nicest interiors in the business.

Chevy recently updated the interiors on its trucks. The new 2022 and 2023 versions have a neat, extra long, touchscreen in the dash, along with controls that are driver-focused. The new interiors are a huge improvement over the cheap plastics and old-school looking small screen that the 2021 and earlier versions have. New interior packages, too, raise the level of the interior to near GMC levels of luxury.

Does the Chevy tow or haul more than a Ram? 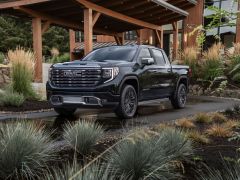 In most versions, the Chevy Silverado and the Ram 1500 are both very competitive. The Ram can two up to 8,320 pounds and haul 2,335 pounds. A Chevy Silverado can tow a maximum of 13,300 pounds, depending on the configuration. It has a payload capacity of up to 2260 pounds. The Chevy Silverado is the second-best selling truck, while Rams are a close third.

Of course these capacities depend on which engine, suspension and towing kit you buy. The Ram comes with several engine options: you can order a V6 or the 5.7-liter Hemi with a 48-volt mild hybrid system. If you want the diesel, though, you’ll have to act fast as Ram has decided to stop production of its smaller diesel engines in January of 2023. The Silverado offers a new 2.7-liter turbocharged four-cylinder engine that makes up to 310 horsepower, however you can still order the 5.3-liter V8, a 3.0-liter Duramax diesel, or the mighty 6.2-liter with 420 horsepower.