What were the most popular SUVs in 2022? Kelley Blue Book compiled a list of the best selling SUVS during the calendar year and most of the models, like the RAV4 and CR-V, are obviously on it. But, there are still some surprises in the top 5. Which SUVs sold the most in 2022 according to KBB?

We’re shocked that the RAV4 is on top of this list. Kidding, the Toyota RAV4 for the last several years has held down the No. 1 spot because it fits the needs of so many people. It seats five, has a good sized cargo hold, and comes in several different versions that make it either a boulevard cruiser or even an off-roader. The RAV4 comes as a basic $27,975 in LE trim, or can come downright luxurious in $36,280 limited trim.

You can also order the RAV4 in a Hybrid, which means it comes with Toyota’s clever all-wheel drive system. The Prime version is a plug-in hybrid SUV that offers up to 42 miles of all-electric range. We’re not surprised that Toyota sold 399,941 versions of this SUV in 2022 according to Kelley Blue Book.

Honda is chasing the RAV4 with its CR-V, and it’s getting closer. The 2022 sales figures from KBB combine two different CR-Vs because Honda updated the CR-V for 2023 in the middle of 2022. One way to boost sales is to launch a new version of an SUV. The new CRV is larger, more powerful with 190-horsepower turbo engine, and it has more traditional two-box SUV styling.

This one’s a surprise. Not that Tesla Model Y is a bad SUV, far from it. It’s expensive, it’s funky, it’s and electric. But, the Model Y also holds the distinction of best-selling EV in the U.S. right now.

When Jeep re-launched the Grand Cherokee in 2022, many were wondering if it would keep the same rough-and tumble four wheel drive, good looks, and power of the previous version. Not to worry, Jeep hit a home run with the new Grand Cherokee and sold 223,345 examples in 2022. It comes in 11 trim levels, from the base $42,830 Laredo to the uber-lux $79,000 Summit Reserve 4xe PHEV.

Jeep skipped making a hybrid version and instead makes a potent 4xe plug-in version that can silently trundle through the woods to grandmother’s house. 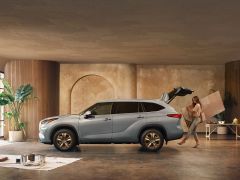 Totally not surprised. The Highlander meets the needs of a lot of buyers, and it has a reasonable starting price, and immense capability. The Highlander for 2023 has new turbocharged engines, and a cool all-wheel drive hybrid system. It can also seat seven or eight passengers, and it can hold plenty of luggage for week-long road trips.