Does Rivian have a production problem, or is this just a farce? The recent Rivian news points to the company falling short of its production goals for 2022, which could be alarming. The Rivian R1T goes head to head with the market giants, which means the company can barely afford any missteps.

How far off was Rivian from its 2022 production goal?

According to Bloomberg, Rivian stated a production goal of 25,000 vehicles for 2022. The company built 24,337 electric vehicles, which barely missed the target. While this miss is by less than 1,000 vehicles, it’s a considerable number that could be alarming. During the fourth quarter, 10,020 electric vehicles were made by Rivian, which could be big news for the company.

Maybe the bigger Rivian news isn’t the narrow miss of the end goal by this company, but what happened in March. Reuters tells us that Rivian halved its initial production goal from 50,000 units to 25,000 in Mach. This meant half of the Rivian R1T electric trucks headed to customers than originally planned.

What caused the shortage of Rivian trucks?

Most automakers are still facing supply-chain disruptions and building nothing but electric vehicles seems to worsen these disruptions. These issues not only forced this EV automaker to cut its production goal in half but to also push back the start-up of the R2, which is a small vehicle, to 2026.

The troubles for this new startup automaker that only recently went public in November 2021 aren’t singular. Tesla, the world’s largest electric vehicle automaker, also missed the expected production and delivery targets for the fourth quarter of 2022. This caused the stock price of Tesla shares to drop.

Why is a narrow miss alarming for Rivian?

The Rivian R1T is a new electric truck heading to the market at a relatively high price. This truck sits in the midsize pickup class in terms of size. That said, it is expected to compete with all electric trucks, regardless of size. The starting price of the R1T is $70,000, which puts it closer to most luxury pickup models.

The problem facing this Rivian truck is competing with the big dogs of the pickup truck market. Ford, GM, and Stellantis all have a strong foothold in the truck market with the F-150, Silverado 1500, Sierra 1500, and Ram 1500. All four of these trucks will soon have electric variants in the market. Ford is already competing in this class with the Ford F-150 Lightning.

Rivian recently built a new production facility in Georgia, which increases the production levels possible for this company. Unfortunately, one additional facility won’t be enough to compete with similar numbers to what the Detroit Big Three can deliver.

Of course, it’s possible the Rivian R1T electric truck was never meant to compete with the standard bearers of the class, but it will need a strong foothold if the company intends to survive. This means this company cannot afford to miss production goals.

Next, check out changes in Georgia to allow Rivain R1T sales, or learn more about the new Rivian R1T electric truck in this video below: 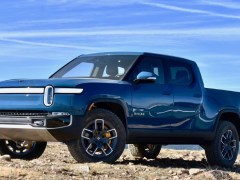