Subaru has gained a reputation for making inexpensive wagon-like SUVs that come with cool features, like all-wheel drive standard. But, one look at the dizzying array of models, and trims, and it’s hard to decode which Subaru is which. Though all of Subaru’s models look similar, and have similar features, one has to be the cheapest, right?

The Crosstrek is the cheapest Subaru

The Subaru Crosstrek starts at $23,645. That base model, however, is fairly austere. Stepping up to the Sport model for $27,995 gets you Subaru’s StarTex upholstery, push-button start, and critically, the 182-horsepower engine. The Limited has all of the options, and it starts at $29,495.

The Crosstrek Hybrid comes as a plug-in-hybrid, but it’s really a different beast since it starts at a steep $36,845. It has even less room in back because of the battery pack.

What engines does the Crosstrek have?

The Crosstrek comes with a 152-horsepower 2.0-liter four-cylinder engine standard. It’s tied to a CVT, or continuously variable transmission, so it has no gears. It can be ordered with a 182-horsepower 2.5-liter four-cylinder as well that perks up the cheapest Subaru. However, the Crosstrek does offer a manual transmission, which makes it a fun rarity in the modern world.

However, that mouse motor does give the base Crosstrek stellar fuel economy. It gets 28 mpg in the city and 33 on the highway.

What are the trim levels of the Crosstrek?

The base version is fairly plain. The Premium adds a heated seats, a leather steering wheel, Subaru’s Starlink safety aids, and a offers other niceties like a power driver’s seat. The Sport adds some off-road prowess, with hill descent control and more, as well as keyless access. The Limited comes with everything as well parking sensors, larger wheels, and leather-trimmed upholstery.

Is the Subaru Crosstrek reliable?

The Subaru Crosstrek gets a “great” quality and reliability score from J.D. Power. Owners also reported to J.D. Power that the driving experience is great, and that the cars have strong resale value. At RepairPal, which also rates reliability, the Crosstrek gets a 4.5 of five, which ranks it first of the 26 compact SUVs rated by the site. Overall, it’s reported to be a reliable SUV.

How much does the Crosstrek hold? 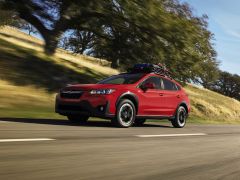 5 Reasons Why the Subaru Crosstrek Is the Best-Selling Subaru?

The best-selling Subaru, the Crosstrek’s, cargo area is limited. The seats fold, but they don’t fold completely flat. It holds 55.3 cubic feet of goodies. For comparison, the larger Outback holds 75.6 cubic feet of stuff in the back. It’s a bit narrower than other Subarus, so if three sit in the back, they will have to become fast friends. It is the smallest Subaru you can buy.