Just the name BMW brings to mind sporty cars and SUVs with styling and handling that sets them apart. But these are premium cars and SUVs, and that means they come with a price to match their handling and sumptuous leather-lined interiors. But they’re not all million-dollar vehicles, in fact the cheapest BMW SUV was redesigned for 2023 and offers quite a bit for less than $40,000.

The BMW X1 is the cheapest BMW SUV

For 2023, the cheapest BMW SUV, the BMW X1 xDrive28i, got a complete redesign. In that redesign, the X1 gained a couple inches in length and width. That extra size doesn’t just mean more room inside, though it does mean that, it also means that the smallest BMW SUV also gains a bit more handling prowess. Unfortunately, it also now has the biggest kidney bean grille ever fitted to an X1, which looks outsized on the front end.

That update also gave the interior a new look and a new feel. It has two screens, one in the gauge cluster and a larger one in the center. Inside it now has the easier-to-use iDrive8 infotainment system with navigation. Also, all X1s get dual-zone climate control and a power liftgate. A $1,950 package that includes heated seats and steering wheel is also an option, as is a premium tech package for $4,200 that adds a 360-degree camera, a heads-up display and more. In that package, you also get a self-parking feature, lane centering, and adaptive cruise control.

The BMW X1 xDrive28i only gets one engine option

For 2023, the updated X1 now only has one engine option. That may sound like a bummer, but the 241-horsepower four-cylinder makes 241 horsepower and can take this little SUV to 60 mph in less than 5.5 seconds, according to Car and Driver. It’s also rated at 28 mpg in the city, 34 mpg on the highway, which are fairly impressive numbers considering this is an all-wheel drive SUV.

New for 2023, xDrive is standard, which means that even the cheapest BMW SUV is now all-wheel drive. Most people skipped over the two-wheel drive versions of previous models anyway.  The $2,300 M Sport package is more of an appearance package now, though it does come with BMW’s adaptive suspension that keeps it stuck to the road a bit better during hard cornering.

On the car side, the BMW 230i is the cheapest 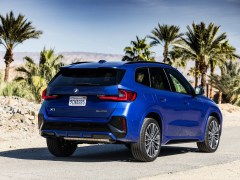 How Many SUV Models Does BMW have?

The BMW 230i starts at $38,200, or just $600 less than the SUV. While it’s known for its sprightly handling, with a 255-horsepower four-cylinder, it’s a small car. That means that it has a back seat that’s not great for anyone larger than a gymnast or a jockey.

That being said, you don’t buy a 230i because it can carry a full sheet of plywood in the back (it can’t). You buy it for blasting on mountain roads and for making your commute more fun.