Some of us just need a full-sized SUV. Whether we have a big family, or simply big stuff to haul and tow, these full-sized behemoths are necessary for a lot of us. All of these SUVs are based on full-sized trucks, which means they’re tough and they can haul and tow a lot of people and stuff. But, these are also comfy places to be, whether that’s to the soccer field or the hunting blind.

Which five large SUVs do the experts at Edmunds recommend for 2023?

There’s one missing (sort of)

Interestingly, Edmunds ranked the Toyota Sequoia in sixth place. But, it seems that the reviewers haven’t yet rated the new 2023 version and instead put the outdated 2022 version in 6th place. The 2023 Toyota Sequoia SUV has won several accolades and will likely move up the list soon.

The Chevy Suburban is synonymous with giant SUV. The Suburban is the original long-wheelbase eight-passenger SUV, and for several decades (since 1935, to be exact) has been one of Chevy’s most important vehicles. Chevy knows this market, and fittingly the Subub’ can get a 355-horsepower V8 or the mighty 6.2-liter V8 with 420 horses, as well as the torquey diesel for towing. It can be equipped as a luxury SUV, an off-road monster with the Z71 trim, or as a people hauler.

The Suburban may not have the fancy fit and finish of a luxury SUV, that’s what the Yukon (below) is for. But for hauling people, or lots of stuff, it’s hard to beat. Prices start at about $58,000, while the more comfortable RST and Premier versions start at $67,000 or $73,000.

While the Chevy Suburban is the long-wheelbase king, the Yukon is the slightly shorter more luxurious version. You can order it as a long-wheelbase Xl version, but either version has capabilities that are beyond most of us. It can seat eight, it can tow up to 7,900 pounds, and in Denali Ultimate trim it can cost nearly $100,000.

The Yukon has a level of fit and finish that its Chevy cousin, the Tahoe, can’t touch. But, you do pay more with prices starting at about $60,000.

Ford was happy to let the Expedition sail on as an also-ran for years. But recently Ford has paid more attention to the Expedition and updated it with the twin-turbo 3.5-liter EcoBoost V6, that makes an astounding 440 horsepower. This humungous SUV needs that power because its bit, imposing, and with a towing capacity of 9,300 pounds, you’ll need all the grunt you can get. But now the Expedition gets some special trims that make this trucklike SUV appealing to off-roaders, like the Timberline version, or for luxury cruising, in Limited trim.

The Expedition just undercuts the Tahoe or Yukon on price, and starts at about $57,000, while the 4×4 Timberline comes in at about $73,000. The new for 2023 Stealth version adds a healthy dose of horsepower.

Take everything we said about the Yukon, and then give it a Chevy badge. That’s the Tahoe. It has all of the same goodies as the Suburban, but in a (very slightly) easier  to park version. The Tahoe has been a staple of school pickup lines for years, but also for those who like to explore the wilderness. 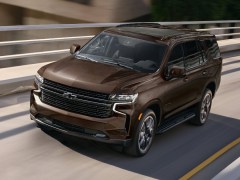 The Nissan Armada got a major refresh in 2021 and that improved this big Nissan. The Armada comes stuffed with a powerful 400-horsepower V8 standard, and it’s based on Nissan’s big Titan pickup. But, unlike the Titan, it has smooth on-road manners thanks to fully-independent suspension to match its luxury mission. The Armada can seat seven or eight in comfort, surrounded by a high-quality interior that isn’t inspired, but it is pretty.