Last week, 6ABC Philadelphia obtained exclusive footage of the harrowing car wash incident. It posted the video on YouTube, and it has since gone viral. The incident happened at the Wave Car Wash in Colomar, a suburban community in Montgomery County.

The video starts with the unnamed 77-year-old driver in a silver Toyota Camry paying at the toll in front of the gate of the automatic car wash. Then, the elderly man accidentally slammed on the gas and crashed through the gate — with the driver’s side door still open. The Camry accelerated and dangerously sped into the car wash, moving quickly along the track. It then hit the right side of an archway in front of the machinery — and flipped on its side.

Driver trapped in Camry for over 90 minutes, then taken to hospital for injuries to his leg

The harrowing ordeal for the 77-year-old driver didn’t stop there. After the car accident, he was trapped inside his Camry for over 90 minutes while crews tried to rescue him. Once freed, first responders took the elderly man to an area hospital to treat injuries to his leg. However, he is expected to survive.

6ABC Philadelphia spoke with Bill Ashmead, a Colomar resident who came to get his car washed shortly after the incident. He said, “I can’t even imagine the process of having a car turn over inside a car wash. I don’t think it’s ever happened before.”

Also, Darin Kapanjie, the owner of Wave Car Wash, released a statement to 6ABC Philadelphia. In the statement, he expressed gratitude that there were no serious injuries. However, he also expressed concerns about how the incident would adversely impact his business.

“We are relieved that nobody was seriously injured,” said Kapanjie. He continued, “This was a severe accident that is extremely unfortunate for our customers, and our equipment. Being a small business owner isn’t easy, accidents like this don’t make it any easier.” 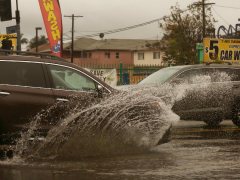 Car Wash Cheated $800K From Workers With $7 an Hour Wage, Forced to Pay

For many, it might be natural to assume that diminished faculties as the result of “old age” are the primary cause of the 77 year-old-driver flipping his Toyota Camry in the automatic car wash. A considerable number of the commentators of the video suggest this. Some even cited the need for stricter regulations for senior drivers:

However, studies show that senior drivers are not the age group that causes the most car accidents. It’s teenage drivers. As detailed by the Traffic Safety Store, a United States Census Bureau study shows that teen drivers cause 12% of car crashes, compared to 7.5% for seniors (age 65 and over). Also, the Insurance Institute for Highway Safety (IIHS) found that teenagers are three times more likely to get into a car crash than drivers over the age of 20.