Don’t go stealing in cars in New Orleans. Folks down there are different, as one carjacker found out the hard way. Video footage shows our friendly neighborhood Lexus-Man running into his home to grab something when someone pulls up to steal his red Lexus RX. Too bad the car thief picked the wrong guy to fool with this day.

Car theft is out of control, but one man isn’t having it

The Lexus RX owner’s home security camera caught the thrilling event on tape. Originally reported by local WDSU News, we now have the whole story to go along with this incredible footage.

The Lexus owner pulls up outside his home, puts the car in park, and runs inside for a brief moment. At that time, another car pulls up, and the alleged thief gets into the Lexus. While the thief is working, the owner returns to find the thief in his car. He bravely steps in front of the car as the thief gets it moving. What happens next is nothing short of badass.

The owner dances with the moving car, positioning himself in front so the thief would have to run him over in order to leave. Once the car thief decides to go, the owner jumps on the hood of his Lexus, climbs up the windshield, and begins fighting the thief through the sunroof, ultimately pulling his jacket up through the opening, obscuring the thief’s vision.

As the car is still moving down the road, crashing into mailboxes, the thief seems to have had enough and bails, jumping into his getaway car. The Lexus owner, still in his work suit, throws the thief’s jacket as the goofballs drive away.

Making the whole thing even more insanely New Orleans flavored, the reports say he even threw his container of gumbo at the thief. The truth is truly better than fiction at times.

What does Lexus-man have to say? 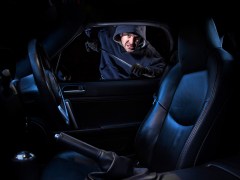 Car Theft Expert: How to Make Your Car Unattractive to Thieves 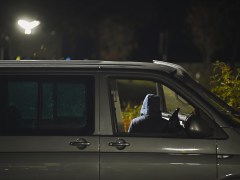 6 Things You Can Do to Prevent Car Theft

According to CarScoops, he also said that “In hindsight, there were better decisions I could have made, but I am fed up with crime in our city. We expect our police and municipal leaders to do what is necessary to protect its citizens.” The sentiment makes sense, considering that a reported 4,011 vehicles were stolen last year, a 35 percent increase from 2021.

There is no excuse for anyone to take something that doesn’t belong to them. However, the owner of the Lexus could have kept his blood pressure down that day if he had not left the keys in the SUV. Most car thefts are done based on opportunity. Never leave your car running and unattended.