In a world of useless items, the Ram 1500 Revolution EV takes the cake. Not that this new electric Ram truck isn’t useful, inventive, futuristic, and impressive, but it does have some features that look great at first but aren’t very useful at all. One of these features that don’t make much sense is the Shadow mode, which turns this truck into a giant well-trained puppy.

What is Shadow Mode for the Ram 1500 Revolution EV?

If you’ve ever thought it would be great if your truck followed you, that feature is the Shadow Mode of the Ram 1500 EV. MotorTrend tells us that it can follow you wherever you need to go. While you might not want this big truck to follow you into the restaurant for dinner, there are some places where it could make sense.

Where could Shadow Mode come in handy for this electric truck?

Imagine, if you will, the bed of this electric Ram truck filled with mulch, bricks, or lumber for the job you’ve got to tackle that day. If you’re working on a new housing development and need to put mulch down at several locations, you’ll be glad not to need to step in and drive the truck from one house to the next. Instead, this Ram can follow you along and bring the mulch where you need it.

Besides following you to lay down a path of materials, the Shadow Mode is mostly useless.

Will Shadow Model make it to the production version of the Ram 1500 EV?

The electric Ram truck unveiled at CES 2023 is the concept version of this impressive truck. Shadow Mode was included in this new concept version, to allow you to imagine what an electric truck might bring to the market. We don’t know which features will make it to production, but the Shadow Model could be an option for consumers who actually need it.

Are there any other features that shouldn’t make it to the production model?

Among other relatively unnecessary features for this truck, we see the narrow, but impressively long tunnel that runs the length of the truck and the third-row jump seats.

The tunnel measures 18 feet long but just a little more than one foot by one foot in size. This tunnel is too narrow to be useful.

The jump seats can be useful when you want a pair of folding lawn chairs for tailgate parties. They lock into the tailgate to give you an elevated seating position. Other than tailgate parties and some fun in the wilderness, these seats aren’t very useful.

If Ram offers the tunnel and the jump seats as options, they can be great for a few shoppers that might get more out of them than most drivers.

This new electric Ram truck should arrive in 2024 and give us the first hints at the future style and direction of Ram. Strangely, Ram didn’t reveal the power and driving range specs at CES 2023 when showing off all the bells and whistles of this amazing truck.

Next, check out what makes some features of the new Ram 1500 EV useless, or learn more the Ram 1500 Revolution EV in the video below: 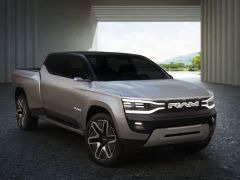 Does the New Ram 1500 EV Turn the Clocks Back for Electric Trucks?