Almost anyone who’s been to a new car dealer in the last two years has seen the empty parking lot spaces. That’s a sign that new car inventories are low. Over the last two years, manufacturers have had to contend with both high demand, but also a lack of inventories thanks to chip shortages and more. However, that looks to be easing and a new report says to wait for this fall to buy your new car or truck if you want a lower price.

Wait until the fall to buy a new car or SUV

The average new car price is now $47,681. That’s the highest that’s ever been, according to the Wall Street Journal. While new car price markups reached few hundred dollars over MSRP, new truck and SUV prices were up as much as $1,200 over MSRP. Dealers can markup prices because demand is high. However, new models come out in the fall, so the best time to buy is when dealers are trying to clear out inventory.

Another factor helping to lower the price of a car or truck is the price of a loan. The average rate for a new car was 6.5% at the end of 2022, according to the WSJ. That’s up from 4.1% in 2021, and that means cars cost more so demand is dropping a bit.

Prices are dropping for new cars and trucks

The average price of a new car last November was $47,681, the highest that has ever been. However, according to J.P. Morgan, even used cars are seeing an increase. In fact, the average used car costs 42.5% more today than it did just three years ago. But, J.P. Morgan expects that new car prices should drop 2.5% to 5% by in 2023. Used car prices should drop 10% to 20%, but you’ll have to wait.

Don’t expect prices to plummet suddenly, however. The longer you wait, the better a deal you’ll probably find this year. 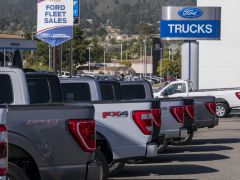 Could High Truck Prices Be Going Down Soon?

Electric vehicles are affected more than gas-powered cars. According to TheStreet, key materials in batteries saw a huge price spike. Those metals, like lithium, nickel, and cobalt that keep a battery charged, are commodities whose prices go up with demand. That means that as EVs get mor popular, the prices of the raw materials used to make them go up, too.

Kelly Blue Book reports that EVs cost about $18,000 more than a comparable gas-powered car. The batteries and other tech add to the price. However, an EV can save you $5,000 to $10,000 annually on gas, making them a good longer-term purchase, if you can afford the up-front cost.

That’s one reason the $7,500 EV tax credit was added to the Inflation Reduction Act. The Act has several prices caps in place to encourage manufacturers to make lower-priced electric cars and EVs. The price cap for electric cars to qualify is $55,000, while that number is $88,000 for electric SUVs. But, they have to be made in America, like the Ford F-150 Lightning or even a VW ID.4 SUV, which are made in Tennessee.