Volkswagen is one of the largest auto manufacturers in the world, delivering approximately 9 million cars and SUVs a year. While the car brand is infamous for being a part of the 1960s hippie subculture with the arrival of historic cars such as the Beetle and VW microbus, many people don’t know the history behind the famous automaker.

The name Volkswagen means something special when translated from German and stands for an automobile built with everyone in mind, despite coming from a unique origin.

The history behind the notorious automaker

In 1937, the German government established the Volkswagen Group, tasking Deutsche Arbeitsfront, a Nazi organization, with mass-producing an affordable motor vehicle. They built a factory in Wolfsburg, Germany, which is a popular tourist attraction today, with visitors able to explore Auto City.

According to Britannica, World War II broke out before mass production of motor vehicles began at the Wolfsburg plant. In 1939, “the factory was repurposed to produce military equipment.” After years of fighting, the building was destroyed by Allied bombers but eventually rebuilt for manufacturing purposes. In 1946, Volkswagen was able to start mass-producing motor vehicles for the public. With the West German government taking over the company, the Nazi regime no longer had control of the plant, and “more than half of the passenger cars produced in the country were Volkswagens.”

In a recent press release, Volkswagen reported, “With the Type 1 (Käfer) model, and the Type 2 (Transporter) model added in 1950, Volkswagen became a symbol of Germany’s economic miracle.”

What Volkswagen stands for

The German translation for “volks” is people, and “wagen” means car. Therefore, Volkswagen stands for the people’s car. That is what Adolf Hitler had in mind when he hired Ferdinand Porsche (yes, the founder of Porsche) to design an affordable family vehicle for German citizens. Porsche was the mastermind behind the original Volkswagen Beetle, but the car did not enter mass production until years later because of the war.

First Versions re-created a newspaper clipping from 1938 that included an advertisement for the first Volkswagen vehicle. It read, “The car in the foreground is a sample of what Germans are going to buy for around $400, if plans of Chancellor Hitler, shown at the microphone, come true.” It said the new vehicle would have “rear engines, developing 24-horsepower,” and that “his dream is that German roads will be black with them in a short time.”

According to Rewind & Capture, “The original Beetle was called the KdF-Wagen, or the Kraft-durh-Freude-wagen. In English, the Strength-Through-Joy car.” In the late 1950s, the car became fondly known as the Beetle, coined by an American ad agency trying to disassociate the German-made vehicle from its dark association with Hitler. 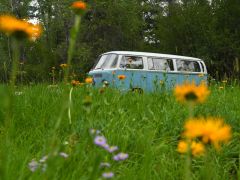 History of the Volkswagen Bus

FitMyCar explains the bucket car (Kubelwagen) and the amphibious (Schwimmwagen) were variants of the original Volkswagen KdF-Wagen produced in Wolfsburg for military purposes.

Once the war ended, production of the Volkswagen Type 1 (aka KdF-Wagen) began, eventually becoming the most successful vehicle in the automotive industry. In 1971, at its peak, Volkswagen produced 1.7 million Beetles.

According to FitMyCar, the Volkswagen Beetle became the most manufactured automobile, with 21,529,464 units delivered. “It had the longest-running production of a single platform which ran from 1938 to 2003.” The last original Beetle design ever built, named the “El Rey,” which in Spanish means king, was manufactured at the assembly plant in Puebla, Mexico, in 2003. They shipped the iconic vehicle to Wolfsburg, Germany, now holding an esteemed spot in the company’s museum.