In the United States, pickup trucks are extremely popular and expensive. Because of that, buying new is not always an option for a lot of folks. And if you are interested in a used full-size truck, you likely want something that is reliable. According to Consumer Reports, this used Toyota Tundra truck might be the most reliable.

Is a used Toyota Tundra reliable?

The Toyota Tundra has long been seen as a reliable full-size truck. It’s been around for years, and that means it’s easy to tell the problematic models apart from the ones that deserve consideration. Whether you need a work truck or just enjoy the ownership experience of a full-size pickup, the Tundra can be a safe bet.

Generally speaking, Consumer Reports is filled with praise for the Toyota Tundra. According to Vehicle History, outside of 2010 and 2016, this used truck is one that is worthy of consideration. Unfortunately, that reliability does come with some downsides though. You will probably pay more for a Toyota truck than you might for a different manufacturer.

In terms of reliability, it looks like the 2013 Toyota Tundra and 2018 Toyota Tundra have good marks. Depending on your budget, you can probably find one that fits your price range. One of the major perks of the 2018 model is that it comes with Toyota’s safety suite. This will provide you with some additional confidence thanks to the drive assist features.

The 2013 model might be older, but it will also be cheaper. So, if you are shopping for a used truck on a budget, looking for an older Toyota Tundra is likely the right call.

Does the Toyota Tundra have any problems?

Every full-size truck will have problems, and that includes the Tundra. Common issues include loss of power steering, electrical issues, and a sticky accelerator pedal. Most of these problems have been corrected through recall notices. So, when shopping for a used Tundra, you will probably want to confirm any active recalls have been performed.

From 2012 to 2017, the Tundra was also impacted by malfunctioning airbags. By 2019, this issue was fixed, but the 2019 Toyota Tundra had a fair amount of recalls anyways.

This is not the only good used full-size truck

Just because Consumer Reports picked the Toyota Tundra as one of its favorite used trucks, that does not mean it is the only option. If you are familiar with the world of trucks, you likely know that opinions can run fairly hot. Whether that be only driving domestic pickups or swearing by a brand such as Toyota. 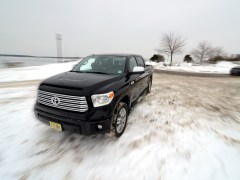 Consumer Report’s pick also does not mean that every Tundra will be reliable. Each truck has its own unique history, and one that was treated poorly will probably not serve you well. If an older Tundra has been treated better, it could actually be more reliable than a newer example. So, that is something to keep in mind when searching for a used full-size truck.