While we said goodbye to the Toyota Avalon for 2023, Toyota isn’t giving up its premium sedan. Instead, the 2023 Toyota Crown is here to take its place. In the battle of the new Toyota Crown vs Toyota Avalon, it’s a matter of substance versus style.

Engine and fuel economy of the Toyota Crown vs Toyota Avalon

Let’s start with what you get under the hood, which is where the Avalon always made a mark. Any 2022 Toyota Avalon you find will come with one of two engine choices. The 3.5-liter V6 is the standard kit. With it, you get 301 horsepower and 267 pound-feet of torque. There is also an Avalon Hybrid that utilizes a 2.5-liter four-pot and electric motors to move you along. The V6 Avalon is good for an EPA-estimated 32 mpg highway and 22 mpg city. Meanwhile, the hybrid version rates at 43 mpg around town and 44 mpg on the open road.

Moving to its replacement, the 2023 Toyota Crown is exclusively a hybrid. For those seeking a premium hybrid experience, the Toyota Crown vs Toyota Avalon debate may tip toward the older model. The standard hybrid system in the Crown uses three electric motors plus a 2.5-liter four-cylinder engine to offer a total of 236 horsepower. And with the Crown Hybrid Max, a 2.4-liter turbocharged engine combines with an electric motor to offer 340 ponies combined.

Unlike the Avalon, the Crown comes with all-wheel drive as standard, though ultimate efficiency is lost as a result. The Crown tops out at 42 mpg city and 41 mpg highway with the base hybrid powertrain on board. Switching to the 340-horsepower system drops efficiency to just 32 mpg highway and 29 mpg around town. For city driving, the Crown is an excellent choice. But for your highway drives, the Avalon formula proves tough to beat. 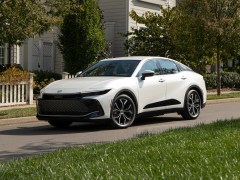 4 Reasons the 2023 Toyota Crown May Disappoint You

While what’s under the hood may be a letdown, the 2023 Toyota Crown truly shines inside. An elevated driving position means better visibility and an easier time getting in and out, according to this review from The Drive. Each new Crown model comes with eight-way power-adjustable seats. Plus, dual-zone automatic climate control and ambient interior lighting are standard in the new Toyota flagship. A 12-inch infotainment display is a three-inch upgrade over the outgoing model as well. And unlike the outgoing Avalon, the Crown is available with ventilated seats for the ultimate comfort.

That’s not to say anyone who can find a 2022 Toyota Avalon will be bereft of creature comforts. You’ll still have leather seats, a power-panoramic moonroof, and power adjustability in the older Toyota model. But if the Crown was looking to take the flagship, ahem, crown from its predecessor, it has done so where it counts.

The only area where the interior of the Crown falls short is with overall space. You’ll get one fewer cube in the trunk and lose three cubic feet of passenger area, most of which shows itself in the lack of rear seat legroom. However, you will get more headroom in the new Crown, making it more comfortable for taller drivers.

The Toyota Crown vs Toyota Avalon debate comes down to comfort