The Toyota Cressida was ahead of its time. Produced from 1978 to 1992, it was popular with families and young adults. However, what are Cressida’s history and features? Is it rare, and what replaced this underrated automotive icon?

The Toyota Cressida was initially only available in Japan but soon became available in other markets such as Australia, Europe, and North America. It was popular for its spacious interior and reliable engine. In 1988, Toyota released an update to the Cressida, which included a more prominent grille, new taillights, and an updated interior.

The Toyota Cressida came standard with a 2-liter inline-six engine, produced at 110 hp. It had a four-speed manual transmission or an optional three-speed automatic transmission.

The interior was spacious and comfortable, with plenty of room for five passengers. The trunk could hold up to 15 cu-ft of cargo. Standard features included power steering, power brakes, cloth seats, and AM/FM radio. Optional features included air conditioning, power windows/locks, a sunroof, and cruise control.

Is the Toyota Cressida rare?

Even though it was a popular model, the Cressida is quite rare. That’s because Toyota only produced it for 14 years before discontinuing it in 1992. As a result, only a limited number are still on the road today. If you’re lucky enough to come across one, you can expect to pay a pretty penny.

Despite its rarity, it remains an important part of Toyota’s history. It’s often cited as being one of the first Toyota models to capture the attention of American car buyers truly. And while it may no longer be in production, there’s no doubt that the Cressida will continue to be revered by car enthusiasts for years to come.

Why did Toyota discontinue the Cressida?

The Toyota Cressida paved the way for a luxury vehicle developed by the Japanese brand: The Lexus LS400. In fact, there wasn’t a better time for Toyota to launch this vehicle. The late ’80s Cressida and the first-generation LS400 had similar styling elements and the same stance. According to HotCars, “In the face of the moment, Toyota decided to discontinue the Cressida in the early ’90s.” 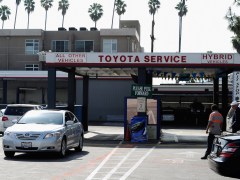 6 Cars With the Lowest 5-Year Maintenance Costs, and Their All Toyotas

What car replaced the Toyota Cressida?

The Toyota Camry replaced the Cressida. The Cressida’s demise came about due to changing consumer tastes and demographics. At the time, sedans were falling out of favor, with buyers favoring SUVs and minivans. In addition, Toyota felt that the name had a different catch than when it was first introduced in the 1970s. As a result, Toyota decided to discontinue the Cressida and replace it with the Camry, which has since become one of the best-selling cars in the United States.

Should I buy a used Toyota Cressida?

If you’re in the market for a used car that’s spacious, reliable, and comfortable, consider adding a Toyota Cressida to your list! Although they’re becoming increasingly rare due to their discontinued status, you can find one at a local car dealership or through a private seller.