The increasingly popular Hyundai Ioniq 5 needs to be on your radar, especially if you’re in the market for an electric SUV. This new option has been blindsiding rivals like the Tesla Model Y and Ford Mustang Mach-E by scooping up tons of awards. Now the 2023 Hyundai Ioniq 5 has a new achievement that can’t be ignored.

The 2023 Hyundai Ioniq 5 is the most satisfying electric SUV

The people have spoken, and Consumer Reports announced that the 2023 Hyundai Ioniq 5 is the most satisfying electric SUV you can buy. That means it makes drivers the happiest. Also, it’s the only electric EV that made the list of the top 10 most satisfying vehicles.

Rivals like the Tesla Model Y, Ford Mustang Mach-E, Chevy Volt, Kia EV6, Subaru Solterra, and more are missing. On an interesting note, the Rivian R1T made the list, but it didn’t get a higher score than the 2023 Ioniq 5.

About 88% of drivers said that they would buy the Hyundai Ioniq 5 and Rivian R1T again. That’s a significant number to consider. As the segments grow, people feel confident with their choice.

Owners are smitten with the 2023 Hyundai Ioniq 5 because it’s pretty green and delivers an engaging driving performance. The rear-wheel SE or standard range model kicks things off with 168 hp, 258 lb-ft of torque, and an EPA-estimated 220 miles of range.

The SE model with rear-wheel drive gets 220 hp and up to 302 miles of range. Opting for AWD adds another motor and increases the power to 320 hp and 446 lb-ft of torque, but reduces the range to 226 miles.

While it does have a lower range than rivals that can achieve up to 320 miles, the regenerative brakes replenish plenty of charge to ease range anxiety.

The AWD model can accelerate from 0 to 60 mph in about 4.7 seconds, which is faster than the Tesla Model Y and the Ford Mustang Mach-E. It has responsive handling and a confident stance to make curves and cornering fun.

You can adjust the accelerator response and how the brakes feel to best suit your mood. Take a relaxing cruise or make your daily commute more exciting.

Also, the Ioniq 5 is comfortable. The ride is smooth, and the interior is quiet, making it one of the most composed vehicles in the class. Plus, the seats in the front and rear are large and supportive. Opt for the leg rest to relax and take naps as the vehicle quickly charges.

The high-quality interior is attractive, with a blend of retro and modern accents. There are plenty of storage cubbies and rays for personal items, and the tech is intuitive. The reserve charging system can power devices and vehicles.

What are potential Ioniq 5 cons? 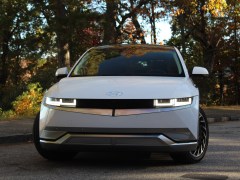 6 Things the Hyundai Ioniq 5 Gets Right 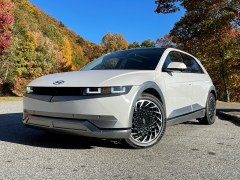 2022 Hyundai Ioniq 5 Review: This is the Electric SUV to Beat

The 2023 Hyundai Ioniq 5 doesn’t have much a front trunk or a frunk. This limits a pretty exciting electric vehicle feature. But to be honest, the frunk in the Mustang Mach-E feels limited, but the cargo space in the rear is abundant.

Also, the Ioniq 5 has a small rear window, which can limit visibility. It helps if you move up in trim levels to opt for the parking sensors and 360-degree camera, but that means you have to go up in price.

But overall, the Ioniq 5 makes people happy. Drivers would buy this EV again. It’s the most satisfying electric SUV, according to actual drivers.