What in the world is going down at the Ram 1500 factory? Stellantis needs to beef up security because taking these trucks is like taking candy from a baby. But Ram 1500 trucks are being stolen from farms too.

The Ram 1500 may seem like it’s an easy truck to steal because it has been a significant target among thieves near the plants and in rural areas. The models from factory lots could be easier to steal because the keys are left inside the truck.

According to AutoBlog, the keys are often left inside the trucks on the storage lots while waiting to be dispatched to dealership locations. Security guards patrol the lots, but thieves can sneak in and then escape by ramming through gates.

Stellantis (FCA) holding lots around Detroit have been targeted at alarming rates. People are getting away with five to eight trucks at a time. Some high-end models are never found, while ongoing police investigations can recover some trucks.

Also, thieves are being caught if they accidentally wreck into things such as semi-truck trailers and parking lot barriers.

One police officer found a 2023 Ram 1500 Limited Night Edition while on patrol. The license plate was registered to a vehicle that was stolen in December.

The driver admitted to knowing that the truck was stolen and facings charges for receiving and concealing a stolen motor vehicle.

Can you steal a Ram truck without the keys?

Thieves enter the cab by drilling a small hole in the side window to pop the lock. Also, thieves can clone the keyfob by copying the signal to gain access to locked interiors.

Once thieves enter the vehicle, they can pop the hood to access the truck’s electronic wiring system and reprogram the ignition system to work with a different key or fob. Then they can drive away.

However, the majority of stolen trucks are left unlocked with the keys inside the cab. So, remember to take your keys with you and lock your vehicle.

Why do thieves target Ram trucks? 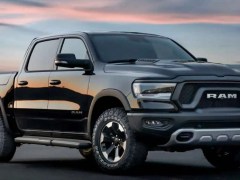 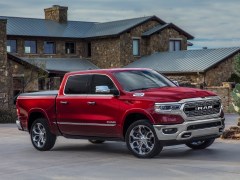 The Ram 1500 EcoDiesel Outranks the Competition in 1 Crucial Area

The Ram 1500 and other high-end Stellantis vehicles, such as the Dodge Charger, Jeep Grand Cherokee, and Dodge Durango, could be targets because of how easy it is to sneak around security.

However, pickup trucks are the most popular vehicle to steal. Both the Ford F-150 and Ram 1500 are in the top five most stolen vehicles. This could be because trucks are so popular. Ford and Ram are also in the top five best-selling cars.

To reduce the risk of your vehicle being stolen, be sure to always take your keys out of the cab and lock it. Also, park under a well-lit area and install a home security system to catch criminals in the act. You can also install a wi-fi tracking device.

We hope Stellantis beefs up its security a little. People have been stealing vehicles from the lots in Detroit for months! At least some of the thieves have been caught, but the issue still occurs about once a week.