Many of us who grew up in trucks probably have fond memories of being banged in the knee by a floor-on-the-floor shifter. Others can remember riding happily in the middle seat of a truck and having a blast. Truck manufacturers are always trying new tricks to make their trucks unique, more spacious, or more useful, and as trucks become more hospitable, every manufacturer has done what they can to maximize interior space. But for the new 2024 Silverado HD, Chevy is going old school and adding a column shifter option for the Silverado HD.

What is a column shifter?

A column shifter is a gear shift lever that’s put on the steering column, along with the turn signals stock and the windshield wiper controls. You simply move the shifter up and down to shift between P, R, D, and L. In older cars and trucks they were common, even for cars with manual transmissions. They fell out of favor as people tended to prefer floor-mounted or console-mounted shifters.

If you’ve ever heard someone talk about a “three on the tree,” that was a three-speed manual on the column. A “four on the floor” was a four-speed manual shifter in the middle on the floor. In many 1930s to 1990s cars that seat three in the front, a column shifter was a common and convenient, way to shift gears.

For many, though, it’s a surprise that GM would put a column shifter in anything. GM took a lot of flack for having this 1950s relic of a shifter in its modern Escalade SUV. Many shamed it into placing in on the console.

Why is Chevy bringing back the column shifter?

One of the bonuses that made column shifters popular (and possibly again) was that they moved all of the clunky shift gear out of the way. They simply clear up space and that’s why Chevy moved it back to the column. In the 2024 Silverado HD, by moving the shifter from the console to the column, made room for a wireless charger and a flow-under console. That means you can have a console if you choose, that adds two more cupholders, hidden storage and more.

Many prefer the simple up-down action of a column-mounted shifter to the easier to use than today’s confusing console shifters. But, many prefer a good-old column shifter for shifting because they do fall easy to hand and feel sporty. 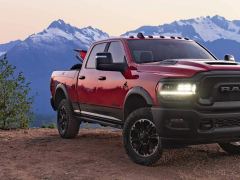 Though Ram has tried its best to eschew the console or column shifters, the brand has acquiesced. If you order the GT package in the Ram 1500, you get a console-mounted shifter lifted from the Challenger.