Electric vehicle charging ports are mess. Some use one type developed in Europe, others use a Japanese system, and then Teslas use their own. But, what about those who have access to a Tesla charger, but want to charge something else, like a Ford F-150 Lightning?

Ford F-150 Lightning trucks will not connect to a Tesla charger. They have two different connector heads. But, now, companies are starting to make adapters for the common charger head, called a J1772. One adapter, which we have not reviewed, from a company called Lectron basically turns a Tesla charger into a standard charger for Fords.

Lectron says the $149.99 adapter is compatible with Tesla chargers like home connectors, Destination Chargers (not a supercharger) and Mobile connectors. With the adapter, and a Tesla account, you can access about 15,000 more chargers. It also supports a 48 amps of power, so it can take advantage of the quicker charging capability of Tesla chargers. Just toss the adapter in your lightning and you can hook into any Tesla charger.

The Lectron adapter will allow you to charge many other cars, too, like the Chevy Bolt, the Nissan Leaf, Ford Mach-E, and others. At Tesla Superchargers, though, the cars talk to the chargers, and they only work with Tesla cars and SUVs. For now.

But, the Ford F-150 Lightning can charge a tesla

One of the coolest features of the Lightning pickup truck is its optional bi-directional charging capability. This system allows the Ford F-150 Lightning to 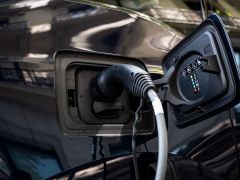 Do All Electric Cars Use the Same Kind of Charger?

Most chargers are Level 2 AC chargers, or alternating current, like your house. The charger in your vehicle converts that power from AC to DC so the battery can take that charge. The charger box has to digest the electricity first, like your stomach, while a DC charger is like an IV into your blood stream.  DC fast charging eliminates that converter so that your car can immediately use that juice, without having to convert it first. These are the CHAdeMO and CCS chargers.

Those fast chargers are the CCS or CHAdeMO units that, for example, Mitsubishi has added to the new Outlander PHEV. CHAdeMO isn’t the type of charger, but the name of the Japanese organization that certifies it. Very basically, CHAdeMO products are designed to work together, and it guarantees that they will.

CCS, or Combined Charging System chargers, are a competing system that is favored by European makes, and you can find it in the BMW i3, the Jaguar I-Pace and Tesla cars and SUVs. However, according to Green Car Reports, more public chargers use the CHAdeMO system than CCS. They look different, however, so you can’t confuse the two. The CCS plug has three outlets on top, the CHAdeMO is a giant circle.