The movement toward electric semi-trucks has gone from idea to application. Tesla delivered some of the first production Tesla Semi Truck models to PepsiCo on December 1. These new Class 8 electric trucks will begin carrying Pepsi and Frito-Lay products around California in 2023. Could this be the future of over-the-road trucking?

How many Tesla Semi Trucks did PepsiCo buy, and where are they being used?

PepsiCo intends to roll out 100 Tesla Semis in 2023, making heavy-duty deliveries to various customers, including Walmart and Kroger. Fifteen of these trucks will deploy from Modesto and 21 from Sacrament. Pepsi will send the remainder to the central part of the country and then to the East Coast.

Why start in California?

Proximity, new regulations, and future state environmental goals all play a role in why these new semi-trucks are being deployed in California first. Tesla has operations in the state, and Pepsi has operations everywhere, making this state a no-brainer as the place to begin.

How does the Tesla Semi Truck range impact the delivery of Pepsi products?

The Frito-Lay division will use the Tesla Semi Trucks to deliver lightweight food products around 425 miles from the facility. This is in line with the Tesla Semi Truck range of 500 miles. This range is achieved with a Gross Combined Weight of up to 82,000 pounds. This is enough for a full trailer to head to one of the big box stores to bring the chips we love.

Heavier loads won’t make such long journeys. Pepsi intends to use the Tesla Semis for shorter trips of around 100 miles for heavier loads of sodas and other drink products. Eventually, Pepsi intends to extend that driving range to 400 miles or more, but to start with, these trips will be much shorter.

Is Pepsi Getting set up to handle the Tesla Semi Truck charge time and needs?

Pepsi has revealed the trucks carrying the Frito-Lay products to the 425-mile distance still have roughly 20 percent battery charge left. This odd fact was reported to Electrek as one of the strange comments offered. Regardless of the battery remaining, it will take about 35 to 45 minutes for a Tesla Semi Truck to recharge.

To handle the charging needs of these Tesla semis, PepsiCo is upgrading its charging infrastructure. There will be four charging stalls at the Frito-Lay Modesto and Pepsi Beverage Products Sacramento locations. With the short recharging times, these four locations should be enough to support these small truck fleets during this initial rollout.

Why would Pepsi agree to use Tesla Semi Trucks?

This brings us to the “what’s in it for me” question, which is often why a company does anything new. PepsiCo receives a $15.4 million state grant and a $40,000 federal subsidy per vehicle to offset the development and infrastructure costs.

Pepsi is buying these new Tesla Semi Trucks outright and plans to keep them for at least one million miles or seven years. This longevity should allow the company to recoup some of the operating costs.

If this change for PepsiCo is successful, it won’t be long before more large companies put new electric semi-trucks on the road. They might not all be from Tesla, but many could be.

Next, check out why truckers leave their engines running, or learn more about the Tesla Semi Trucks in this video below: 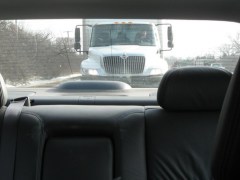 Why Do Semi-Trucks Tailgate? 4 Reasons a Trucker Might Be Tailgating You