Elon Musk once announced that the Tesla Cybertruck was going to be waterproof enough so that it could cross through rivers and serve as a lifeboat. It’s too bad that idea didn’t get passed down to the other Tesla models, as one of them crashed into a pool at a Pasadena, Calif., residence on Tuesday.

NBC LA reported that the driver of the Tesla “apparently hit the accelerator pedal, instead of the brake, sending a car through a wall and into the pool.” The incident happened on the 700 block of West California Blvd at around 9 a.m. on Tuesday morning.

Fortunately, the two adult passengers and four-year-old child inside the car at the time were rescued by staff members of the nearby school. They jumped into the pool to help the occupants, and the car was later hoisted out of the pool via a crane. There were no further details, including the condition of the victims and which Tesla model the car was.

Can a Tesla Model S be fully submerged in water?

Yes and no. Obviously, Tesla did not intend for the Model S to be fully submersible in water. However, Clean Technica once reported on a Tesla Model S Plaid owner that approached the Gruber Motor Company with a crazy idea: To make the Model S Plaid submarine-level waterproof.

The company went to work waterproofing external connectors, intake ports, and any other areas that water could seep through. The goal was to drive the Tesla Model S Plaid through a man-made pool that was 90 feet long and six feet deep. The car was also loaded with 2,000 pounds of lead for ballast and, of course, a driver with a suit on.

Did it work? No. But the car did float through the distance of the pool pretty well. It even looked as if it were doggy paddling at one point. But alas, it had to be towed out in the end.

Teslas aren’t waterproof, but they can go through car washes

Musk Says the Tesla Cybertruck Is Waterproof During Hurricane Ian 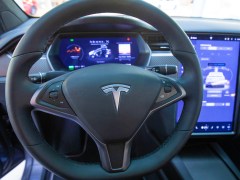 Although it’s apparent that Teslas are not waterproof when it comes to submerging them in a pool of water, they can be washed. If you own a Tesla, remember only to use touchless car washes, lock the car, and put it onto “car wash mode” per Tesla’s instructions. Failure to comply with these rules could result in the car being damaged.

However, if you can hand wash the car, that would be best. Just remember not to wash the car in direct sunlight and not to use harsh detergents. We recommend using the two-bucket method and products from The Chemical Guys, if possible.

Otherwise, keep in mind that your Tesla vehicle is not waterproof, despite what anyone may say. Also, pay close attention when driving; it could be easy to mistake the gas pedal for the brake pedal at times. We’re just glad that the occupants of that Tesla made it out of the car safely.