Two entities that often inspire a large group of enthusiastic fans are pickup trucks and movies. These two things combined in a ridiculous way with Avatar, the highest-grossing movie of all time, and a pickup truck, the best-selling vehicle type in North America. Meet “Mr. Avatar,” a Canadian man with Avatar tattoos all over his body and his crazy Avatar-themed pickup truck. Now that the sequel, Avatar: The Way of Water, arrived in theaters, he is exploding with joy.

Avatar, released in 2009, was groundbreaking with its innovative 3D technology showcasing the fictional moon of Pandora and the blue-colored Na’vi people. The movie gained a large following of diehard fans — or “Avatards.” However, Raymond Knowles, a carpenter from Edmonton, Canada, took this fandom to a whole new level with his tattoos and pickup truck.

Knowles made his body a shrine to Neytiri, the Na’vi warrior-princess in the movie — portrayed by actor Zoe Saldaña. Since the film came out 13 years ago, Knowles gradually added these Avatar tattoos so that they cover 95% of his body. The tattoos earned him the “Mr. Avatar” nickname.

Knowles told CBC News that he thinks that Avatar is the best movie ever. He loves everything about the film and loves all movies from James Cameron, the producer of Avatar. However, Knowles especially connects with the film’s environmental message and empathy for the indigenous population — and how it mirrors the problems with strip mining in Canada and “the government taking away people’s lands for profit.”

His love of the movie, and especially Neytiri, inspired him to get the tattoos and wrap his Chevy pickup truck with Avatar decals. Knowles got his first tattoo around two months after the release of the movie. Before that, he never had a tattoo. His body was a clean slate, free of ink. However, after getting the first tattoo, he just kept adding and adding more.

Knowles said, “I have the blue skin color from my head right down to my toes. I have a few figures on my body as well of Neytiri, the one that pretty much inspired me to do this to myself.”

The pickup truck is just as wild as the tattoos

Knowles takes his Avatar fandom on the road for all to see with his Chevrolet pickup truck, which features elaborate Avatar graphics. It’s just as wild and crazy as his tattooed body. Wrapped in vivid blue and purple hues, the truck features many elements from the movie, with a particular focus on Neytiri.

There are many images of the warrior princess on the truck, including a huge close-up view of her eyes, with the words, “I SEE YOU.” There’s also a “NEYTIRI” vanity license plate. Perhaps “Mr. Avatar” has a crush on Neytiri. Additionally, the truck has Papyrus-font advertisements for Knowle’s carpentry business, which is called — of course, “Mr. Avatar.”

In speaking with CBC News, Knowles said, “The truck is just the start. I’ll keep on driving it around and showing it off, and one of these days it might mean something to somebody.” Also, in a Facebook message to Rolling Stone, he wrote: “People think I’m obsessed. So I have the odd decal on my truck and one tattoo. That’s the joke I use.”

‘Mr. Avatar’ is excited about the new sequel, ‘Avatar: The Way of Water’

Knowles has waited patiently for the long-awaited sequel to Avatar. It was originally supposed to come out in 2014. However, it kept getting pushed back — to 2015, then 2016, and 2017. After that, the release was going to be in December 2021, but the pandemic pushed it back another year. And finally, on December 16, 2022, the sequel, Avatar: The Way of Water, arrived in theaters.

Knowles is excited about the new movie. He wrote to Rolling Stone: “Yes, waiting for the second was way overdue. Many times over the years, I was thinking, it will never get finished and out.” 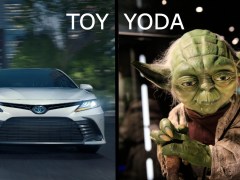 Waitress Once Tricked Into Winning Toy Yoda, Not Toyota in Hooters Contest

Dreams of romantic journeys with his pickup truck on Pandora

Along with the second installment, there are plans for three more Avatar sequels. Knowles will likely have many reasons to celebrate in the coming years as he expresses his fandom with his crazy Avatar tattoos and pickup truck.

“Mr. Avatar” can also wistfully dream about taking Neytiri for a “sweet ride” in his pickup truck on the moon of Pandora. She’s the main inspiration for the truck and tattoos after all. However, Neytiri and the other Na’vi people in the movie are around 10 feet tall, so she’ll probably have to ride in the pickup bed.