The Lexus LM is a luxury minivan model produced and sold by the Lexus luxury vehicle division of Toyota. Not available in the U.S., the LM is a rebadged and upgraded luxury limousine version of the overseas Toyota Alphard minivan.

The Toyota Alphard (also called the Toyota Vellfire) is an upscale minivan model primarily manufactured for sale in Japan and exported to select nearby areas of Asia. The Alphard was first released in 2002, but it wasn’t until 2019 that the rebadged Lexus LM (Luxury Mover) version debuted at the Shanghai International Automobile Industry Exhibition. It then was first released in China in 2020.

Compared to the Toyota Alphard, the Lexus LM is slightly larger and longer, features stronger structural components and higher quality materials, and has several new pieces of infotainment, safety, and performance technology. It’s hard to find competitors for this incredibly unique minivan model due to its limited availability and price, but perhaps the Aston Martin DBX, the Bentley Bentayga, or Mercedes-Maybach GLS could put up a fight.

Read the latest articles about the Lexus LM 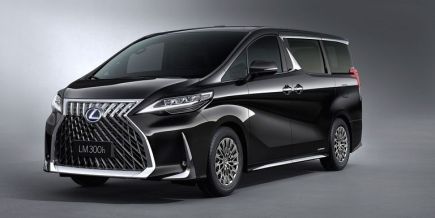