Jiangling Motors Corporation Limited (JMC) is a Chinese automotive manufacturing company. JMC is partially controlled by the Chang’an Automobile Group, one of the largest automakers in all of China.

The origin of JMC began in 1947 as a truck repair shop in Nanchang, China. This led to vehicle production in 1968 and then was reorganized to establish a limited company in 1993, which was named the Jiangling Motors Corporation (JMC).

Beyond its work with Chang’an, JMC is also known for frequently partnering with Ford (who owns a controlling interest), which led to the joint development of the Ford Transit commercial vehicle and the production of Ford vehicles out of its plants. Additionally, JMC also owns the Yusheng sub-brand, dedicated to the production of passenger CUV and SUV models.

Teshun/Touring: A light commercial van based on the Ford Transit

Vigus/Yuhu: A midsize pickup truck influenced by the Ford Ranger and Mazda BT-50

Conquer: A member of the JMC light truck series for commercial transport

Read the latest articles about JMC 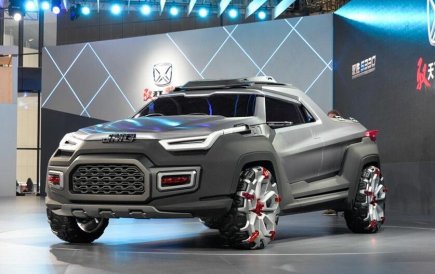 The JMC Yuhu Is Out To Kill Bland Pickups

The JMC Yuhu Is Out To Kill Bland Pickups