So there I was, racing a Detroit Blizzard to the airport when what do I see? A mid-engine Corvette tearing down the highway–with its top down! Best of all, there was a car seat on the passenger side; the driver and his kid were all smiles. But the story has a twist: While this sportscar had the badging of a C8 Z06, it also wore “M Plates,” which meant it was a General Motors test car. Could it have been a 2024 Corvette E-Ray prototype testing the new AWD system (advertised as eAWD)? Here are the details and the video I shot so you can decide for yourself.

Racing a 670-horsepower RWD supercar through the snow!?

My brother and I were driving through Detroit, on the way to the airport. The snow was coming down hard, and we passed half a dozen separate crashes. Luckily, his old Saab and Vermont-honed driving skills proved a fair match for the storm.

As we slowly passed a row of SUVs and trucks, I caught sight of a low, wide sports car. I thought that’s odd and even pulled out my phone to snap a picture. Then I realized it was a mid-engine Corvette.

We inched closer to the car, and I saw not only that it was a convertible, but it had the top down! As we slowly passed it, I saw a middle-aged man driving with a child grinning next to him. Both he and his kid looked like they were having a grand old time. We gave them a thumbs-up, and they waved back.

We drove off for our flight, and I thought, He seemed awfully confident for a guy driving a 670-horsepower RWD supercar through a blizzard. Then my brother said, “Did you notice it was an M Plate car?”

What is an M Plate car?

Michigan has long allowed manufacturers to road test pre-production and prototype vehicles. But they must be outfitted with specially issued manufacturer license plates—also called “M Plates.”—according to Automotive News Canada.

All the Detroit automakers maintain a fleet of M Plate cars for late-stage road testing. Some engineers can even sign out M Plate vehicles and take them home to collect data or attend events. Driving in Detroit, it’s always interesting to keep an eye out for M Plate cars. On rare occasions, an M Plate vehicle will even telegraph what an automaker is working on.

This Corvette Z06 might have been hiding eAWD technology

Intriguingly, the C8-generation Corvette Z06 I spotted in the snow was wearing M Plates. It was Sunday morning, so the driver was likely a GM engineer who took the vehicle home for the weekend. But why would Chevrolet waste one of its manufacturer plates on a C8 Z06, which has been long since road-tested and is available for sale? Why would an engineer take one home for a snowy weekend?

I did a bit of digging and found that Chevrolet has actually been throwing Z06 badges on Corvette E-Ray prototypes so it can test them without camouflage—according to GM Authority.

The E-Ray is an upcoming variant of the C8-generation Corvette. It features a 495 horsepower 6.2-liter V8 driving the rear wheels AND a 160 horsepower electric motor powering the front. As a result, it is the first hybrid Corvette and the first AWD Corvette. Chevrolet is branding this capability as eAWD.

In addition to a 2.5-second 0-60 MPH time and 10.5-second 1/4 mile, the E-Ray has a poor weather driving mode. When Chevrolet announced the car, it even bragged about “all-season performance and composure.”

Which Corvette model did I see?

The prototype GM Authority spotted was an E-Ray with Z06 badges. It even had Z06-style rims. The car I spotted fit this description, and was finished in the same Hypersonic Gray paint. But there was one major difference.

GM Authority identified the incognito E-Ray by its body-colored trim. The Z06 has black trim. The car I saw in Detroit definitely had black trim too. Did GM get wise and swap out the trim pieces after GM Authority outed them?

I’m sure the engineer driving the M Plate Corvette was competent enough to handle one of the most powerful sports cars ever built, in the snow. But the fact that he had his kid along for the ride makes me wonder if he knew something the rest of us didn’t.

If an engineer was taking the first-ever eAWD Corvette out for a casual family cruise during a blizzard, it certainly gives me a lot more confidence in this upcoming supercar’s capabilities!

Next, read about the engineering that went into the exotic 670-horsepower engine in the 2023 Corvette Z06, or see the video I shot of the M Plate Corvette in the blizzard below: 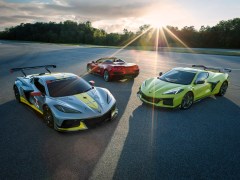 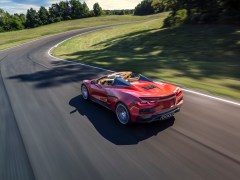 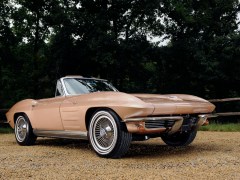 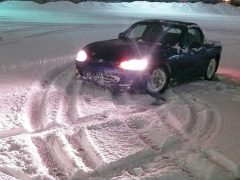 Mysterious Mazda Miata Powers Through Massachusetts Blizzard With Its Roof Down