There has been speculation about a Kia pickup truck emerging for years, and now we have solid proof that a game-changer is on the way. We’re finally seeing the Kia pickup truck take shape, and it’s bigger than expected.

What we know about the Kia pickup truck so far

The first images of the official Kia pickup truck have emerged! This is the first time that a Kia badged truck has been spotted. But there are tons of rumors swirling around. Some clues suggest that two trucks are on the way.

According to Car Scoops, Kia confirmed that two new pickup trucks are on the way. Both are expected to be electric and will arrive by 2027. One model will be a dedicated truck, and the other will be a strategic model for emerging markets.

The truck that has been captured in photos could be a new Kia ute for other countries like Brazil and Australia, where smaller trucks like the Mazda Strada and Ram 700 are popular. Typically, these trucks are a bit weak compared to American standards.

But rumors suggest that the truck will be larger than the Hyundai Santa Cruz. It could enter the mid-size truck market to rival the Toyota Tacoma, Honda Ridgeline, Ford Ranger, and Nissan Frontier.

Also, we’ve heard a few clues about the potential Kia Telluride truck arriving in America. So, there is a lot of information to either confirm or deny.

How much power will the Kia truck have?

It’s currently unclear how much power the Kia pickup truck will have. If it’s electric, then it could borrow the powertrain setup from the Kia EV6. It uses a 77.4-kWh battery pack and a rear motor to generate 225 hp and 258 lb-ft of torque.

You can upgrade to the AWD model for two electric motors that provide 320 hp and 446 lb-ft of torque. But these figures could be different to account for the extra weight of a truck. Also, it could share parts with the larger Kia EV9 SUV, that’s expected to have more power.

The Kia Telluride has a solid amount of power with its 3.8-liter V6 engine that cranks out 291 hp and 261 lb-ft of torque. But it can only tow up to 5,500 lbs. We hope that the Kia truck has a little more muscle.

The new truck in the spy shots is heavily covered in camouflage, but the headlights match the ones found on the Kia Mohave, which is the Telluride’s cousin. This could be to hide the Kia Telluride truck or to keep the EV aspect a secret.

Also, the Mohave offers a turbodiesel engine that isn’t available in the United States and has more off-roading chops than the Telluride. This may indicate that the Kia pickup truck will dominate the wild.

When will the new Kia truck come out? 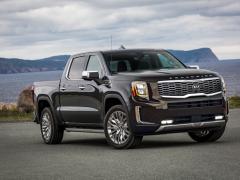 The Kia Telluride Truck Could Arrive Before Its Electric Siblings 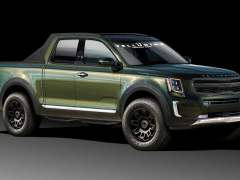 The Electric Kia Pickup Truck Is Aiming for Premium Quality

The Kia pickup truck is expected to arrive by 2024, so we could learn more about it soon. The Kia truck could use existing internal combustion engines before gaining electric powertrains. Also, if it’s made in America, then it will avoid the 25% chicken tax.

Some rumors suggest that a global truck could be manufactured in Korea, making it more expensive in the United States. But that’s better than the alternative. It’s possible that the Mohave-based truck won’t come to America.

Stay tuned for the latest updates. We’ve been following clues about Kia trucks for years and won’t stop now.