Imagine driving down the road, going a little over the speed limit, and then noticing red and blue lights in the rearview mirror behind you. Yes, you’re getting pulled over. The cop could let you off with a warning, or you might get a ticket. Either way, you may have been the victim of a speed trap.

What is a speed trap?

A speed trap is when the posted speed limit changes quickly – like from 55 mph down to 45 mph. According to Ticket Snipers, “A speed trap is managed by watch officials or mechanized traffic enforcement. For example, speed cameras or red light cameras at crossing points that likewise use speed cameras.”

Sometimes, a speed trap can be classified as a cop hiding behind a billboard or an inconspicuous place in order to catch unsuspecting drivers. But in either case, speed traps are typically designed to raise revenue by local municipalities. It’s unfair, we know.

Technically, no. Nolo reports, “Regardless of drivers’ suspicions, local governments justify these reduced speed zones as necessary to ensure public safety.” After all, speed kills, and the sudden reduction of speed in certain zones could mean saving the lives of children or other pedestrians. Also, the fact that an officer was hiding behind a billboard or something else isn’t grounds for dismissing a ticket in court.

What do cops use to enforce speed traps?

Police officers will typically use different tools like a radar gun or a photo radar camera to catch speeding cars. The former is actively used when cops hunt for speeding cars in a speed trap. The radar gun works by broadcasting radio signals in the direction of the moving vehicle. The radio signals bounce off the car and return to the radar gun, which then analyzes the information and compares the frequencies of the initial radio signals to those of the returning ones.

A photo radar camera does the same thing. However, these cameras are typically placed within stoplights, hidden in a parked car, or placed in other inconspicuous areas. These types of cameras are becoming more popular as they can be placed in more areas and don’t require a police officer to be present.

Some drivers use tactics to avoid getting speeding tickets 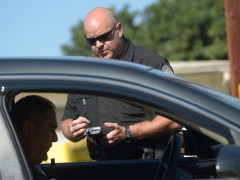 Do Speeding Tickets Affect How Much You Pay for Insurance? 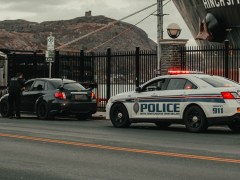 Although speed traps are widely used in sneaky ways by law enforcement, many drivers on the road utilize their own tactics to combat speeding tickets. One way is through common courtesy. Drivers that see a speed trap ahead will alert drivers behind them to slow down either through hand gestures or apps like Waze.

Another way that driver combat speed traps is via the use of radar jammers or detectors. Radar detectors can detect radio waves coming from police radar guns. Some drivers even use jamming equipment that can block police officers’ radars from detecting their speed. If you plan to use either of these devices, be sure to check with your local laws to determine the legality of doing so.

Ultimately, speed traps are annoying and can cause you to receive a speeding ticket if you’re not careful. It’s a good idea to always pay attention to the posted speed limit and slow down when necessary.