You don’t have to be a Toyota fan to know that the TRD Tacoma trucks are off-road monsters. They come with all the bells and whistles you would need to tackle some of the toughest trails. But what if you don’t want all that, or to spend nearly $50,000 on a Tacoma you’re going to beat up? Fortunately, Toyota makes the Trail Special Edition that adds some of the off-road goodies, but not the high price.

What is the Trail Special Edition Tacoma?

What happens when you take a base SR5 Toyota Tacoma and add a 1.1-inch lift, mud tires, some skid plates, and a rear locking differential? You get the Trail Special Edition. Yup, this truck is pretty basic, like the SR5. It foregoes a lot of the tech and the other goodies that the more expensive TRD trucks come with. But, it does look awesome and with its tall stance, 9.4 inches of clearance, and Trail badge, it certainly could confuse several into thinking it’s a TRD.

The Trail Special Edition starts at $40,470 and also comes with bronze wheels, a bed outlet, and Toyota’s previous generation 8.0-inch infotainment screen. It comes with the larger 3.5-liter V6 with 278 horsepower. While that’s not a particularly strong engine, it’s known to be reliable. The Trail also has Toyota’s two-range four-wheel drive with a locking rear differential, in-bed coolers, and a traditional key to start it.

How much is the 2023 Tacoma Trail Edition?

The Tail edition starts at $40,470. But, that is for a pretty basic truck, at least compared to the luxo barges most of us expect in our trucks today. To that end, Toyota does offer navigation packages, a technology package with blind spot monitoring and cross-traffic alert, however those options can add $2,500 to base price quickly.

While it has Apple Car Play, it’s an old-school cable affair. It also has cloth seats and basic trim inside. The older Toyota control system is fine, but the newer versions with the upgraded navigation package do offer more functionality. Regardless, it did earn a Best Trucks award for 2022 from Popular Mechanics.

What doesn’t the Tacoma Trail Edition have?

The TRD Packages have several options the Trail Edition doesn’t offer. The TRD Pro, for example, has Toyota’s Multi-Terrain Monitor with a camera, which uses the truck’s computer to help find grip, as well as the magic crawl control. It also comes standard with many of the Trail’s options, like navigation. While the Trail does have a lifted suspension, it doesn’t have the Fox shocks of the Pro.

The two do have the same four-wheel drive system, skid plates, and V6.

What is the TRD package on a Toyota Tacoma? 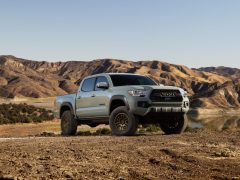 Is the Toyota Tacoma Still a Good Truck?

There are three versions of the Toyota Racing Development package on the Tacoma. The Tacoma TRD Sport is the lower-priced version, and it’s designed more for on-road fun with a stiffer road-biased suspension and a hood scoop. The TRD Off-Road and Pro versions are designed to tackle tougher trails, but they cost nearly $50,000. The Crawl Control system, for example, can scoop the TRD out of deep sand or mud.

Though the SR5 Trail Edition splits the difference between and SR5 and a TRD. It doesn’t have all of the goodies that you’d get in a TRD, yet it’s more capable than an SR5. For cheap thrills off-road, and the option for tail-hopping wheel spin with the locking differential, the Trail edition may give you the off-road ability you want without the price.