Anyone who watches the car market can see a definite push toward electric vehicles. Driving more EVs uses less gasoline, helps ease off dependence on fossil fuels, and is generally better for the environment. The problem is getting enough people to buy into the idea of driving an EV. Some people living in cold climates are hesitant because they think the EV performance will suffer in colder temperatures. Is the cold weather performance of the EV a good enough reason to decide against buying one?

It is true that cold weather can negatively affect the range of an electric vehicle. Cold weather can also lead to longer charging times for an EV battery. However, it is important to understand how and why the EV is negatively impacted.

Consumer Reports wrote, “It’s important to note that EV batteries range not because of how cold weather affects the physical battery but because of the added power demands that come from operating the car in the cold weather.”

Inside Hook points out that the physical battery can be affected by cold temperatures because it can slow down chemical and physical reactions that can then slow down charging times. However, the problem primarily lies in the fact that an EV does not have an engine producing hot air to heat the car. It is the battery that powers the heater, seat warmers, and window defoggers. It goes without saying that when it is cold outside, drivers will use their heaters and seat warmers. Putting these systems on overdrive taxes the battery and will affect driving range.

A good way to lessen the toll of cold weather on your EV is to park it in the garage and charge it until you need it. It is much easier to maintain a temperature than to bring it up. Also, it helps to liberally use seat and steering wheel warmers to warm up when you first start driving instead of depending on the cabin air to warm you up. Using your seat and wheel warmers will save you range while you wait for the cabin to catch up.

The top 5 countries for EVs are cold

In fact, the top 12 spots go to European countries which have ahead in adopting electric vehicles thanks to their tax incentives for buying EVs over gasoline-powered cars. Some of these countries also have plans for phasing out gas-powered vehicles entirely.

Norway was number one in EV adoption in 2021 at 86%. Iceland was a close second at 72%. Norway, Iceland, and Sweden are also at the top of the list for the largest number of EVs on the road per capita.

With some of the coldest countries being the highest adopters of electric vehicles, it shows that cold weather should not be a significant deterrent to buying EVs.

Nordic countries do have advantages 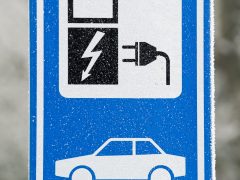 It can also be said that electric vehicles are easier to adopt in Nordic countries, such as Norway, because people do not have to worry about range as much. Most people in these countries live in well-populated areas and more dense urban areas. The driving distances are much shorter, making battery range less of an issue.

These more urban areas make using alternative means of transportation much more accessible. Walking and bicycles are more readily used, according to The World Geography, making dependence on a car less of an issue. In fact, four of the top five countries for bicycle usage are Nordic countries.