So you were driving along a two-lane road on the outskirts of a town the other day, when you saw a sign posted at city limits: “No Engine Brakes.” And naturally, you wondered what the rule means and if it applied to you. The truth is that engine brakes are a technology large diesel vehicles such as semi trucks use to slow down. Because these “Jake Brakes” can be very loud, many cities have ordinances against using them.

What is an engine braking system?

A diesel engine braking system–also called a compression release brake, decompression brake, or a jake brake–converts the forward momentum of a vehicle into engine compression, then releases that compression through the exhaust valves.

With a compression release brake, a driver can rapidly slow their semi truck. But a byproduct of engine brakes is a loud RatTatTatTatTat noise as the compressed air is forced out of the spinning engine.

A Jake Brake relies on one of the major differences between a diesel engine and a gasoline-powered engine. When you take your foot off the accelerator pedal in a gas car, its engine stops sucking air into its cylinders. But a diesel engine has no throttle body, so air continues flowing into its cylinders. If the engine is connected to the drivetrain and spinning, this air gets compressed, then drives the vehicle forward as it decompresses.

A compression release brake simply releases this compressed air before it can create torque and drive the vehicle forward.

Why do truckers use engine brakes?

Truckers use engine brakes to slow their vehicles down quickly while saving wear and tear on their hydraulic braking system.

Most compression release engine brake systems are fully configurable: the driver can select how many engine cylinders to activate, and thus adjust the severity of the braking. The driver can also choose a gear to further fine-tune the braking, then release the gas and clutch and allow the engine brake to slow the truck.

Why is engine braking illegal in some places?

Because semi truck compression release engine brakes can be very loud, many municipalities have ordinances against using them. But modern mufflers can quiet engine brakes down–according to Jaccobs Vehicle Systems. So some towns only outlaw “unmuffled” engine brakes.

Engine brakes have a bad rap. This is probably because many semi trucks in the past ran unmuffled engine brakes in residential areas. Angry homeowners penned ordinances against them, and in many places engine brakes are now outlawed.

But most truck drivers avoid using engine brakes in towns, even when they are allowed. Others have done a great job muffling their compression release engine brakes so they can use them without disturbing anyone.

Next, learn why some semi truck trailers have quilted doors or see an engine brake inspired road rage incident in this final video: 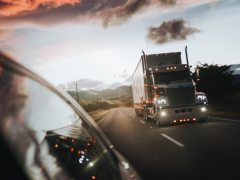 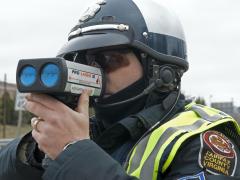 What Is a Speed Trap, and Is It Illegal?