Let’s face it, we all love Richard Hammond, the small yet boisterous Brummie from the greatest car program of all time. Over the decades, his wit and wacky taste have provided millions of people with automotive entertainment. Now, thanks to Drivetribe, we get a peek behind the curtain into his personal and surprisingly modest car collection. Welcome to Richard Hammond’s secret car barn.

What cars does Richard Hammond own?

Our favorite Brummie starts the video from Drivetribe by explaining that this secret car barn of his is his personal space. This is a space that he hasn’t let cameras into before. I know I shouldn’t be as excited to gawk at some wealthy stranger’s stuff, but I guess I’m weak. I was weirdly excited to watch this video for the first time. I’m pleased to say that excitement wasn’t ill-placed.

The first stop in Richard Hammon’s “overspill garage,” as he puts it, is a dead mint “Gixer.” You can tell, despite trying to give the cultural context for why he grew up coveting them, that he only owns this bike because it is significant to him personally. “I got it because I love it. It’s awful, but I love it.” This is the only reason to own a vintage motorcycle.

What makes this car so special is, unlike so many others, Hammond’s Mustang isn’t a Bullit tribute car. This is a factory Highland Green 1968 Mustang 390GT. You can tell in the way that he looks at this car that he loves it. But more than he loves it, it’s his car. He says, “It’s part of my life. Part of the furniture of my life. It’s also filthy right now.”

The Jaguar XK 150 is one of the coolest cars in history. Not only is this a real XK 150, of which Jaguar only ever made just shy of 10,000 examples, but this one was a real racer that competed in the Tulpen Rallye in 1959. Although it has been extensively restored, it still wears its factory Dove Grey over the red leather interior.

Again, we can not only see the joy on Richard Hammond’s face, but he gushes on and on about how happy this car makes him. But come on, who wouldn’t be that happy owning such a lovely car?

Like many of us have had to do in our own ways, Hammond sold this rare little Porsche to pay for the build of his restoration garage. While I’m sure he pinched off a pretty little sum for the 911, he seems genuinely sad to have it gone. The bay spot is still open where the Porsche lived. He refers to its spot as a “sarcophagus.”

This is another spot in the garage where Hammond tells us that it makes him sad. Sitting in its enclosure is the primmered husk of one of the finest little cars ever made. The open two-seater is slated to become a hot racer version of its original self. Hammond wants to lower it on black wire wheels, remove the bumpers, give it a hot cam, paint in English White, and an overall “angry state of tune.” He wants to build a hotrod from an XK 120. That is beyond badass. 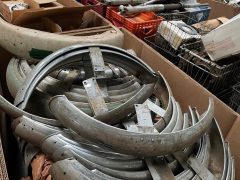 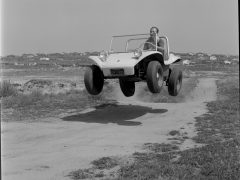 You gotta love that Richard Hammond isn’t too good to show off his Land Rover Series 1 that is taken apart into bits. There is only a pile of parts that, in theory, could be put together to make a complete truck. Not much else to say about that.

The rest of the warehouse

Hammond has several other cars and motorcycles around the barn that he is a bit more cryptic about. For instance, the Peugeot pickup truck. All we get is a grin and little more than, “I’ve got plans for it. I’m not going to say any more than that right now. You might see that again.”

There is also a stunning 1972 MGB GT that he plans to turn into a proper road racer. He is using this MGB GT as a publicity stunt. It’s pretty smart; he plans to race alongside other vintage racers. When his fellow racers crash, he plans to be there with his shop’s business card to offer his services.

This collection of cars makes me love Richard Hammond even more than I already did. He isn’t doing the typical rich guy thing where he yammers on about limited-edition rich guy crap. No, he is showing us the cars the he bought and kept because they are cars/ motorcycles that he loves. I wish that weren’t so special, but sadly it kind of is.