How much does it cost to replace the Ford F-150 Lightning’s battery?

Replacing the Ford F-150 Lightning battery can cost around $30,000, depending on which dealer you purchase it from. This is the cost for the standard range and the extended range battery pack.

Batteries will degrade over time. Just like a cell phone battery, the charge may not last as long over time. Experts estimate that electric vehicle batteries may degrade by about two to three percent over time.

But on a positive note, the risk of the battery randomly failing is low. Ford sold 15,617 Lightning models last year, and there’s only one high-profile replacement that can be found online.

How reliable is the F-150 Lightning?

Currently, the Ford F-150 Lightning doesn’t have an official reliability ranking. It’s still brand new and needs to be put through paces. However, critics predict that it will be less reliable than the average new car.

The prediction is based on similar models in the lineup, like the Ford Mustang Mach-E and gas-powered Ford F-150. The Mustang Mach-E has an average reliability ranking, and the Ford F-150 has a slightly above-average score.

How to protect your F-150 Lightning battery

As far as we know, the 2022 Ford F-150 Lightning doesn’t have any battery problems to be concerned about.  But you can try to protect the battery.

Avoiding exposure to extreme heat while parking can help save your charge. Park in the shade or plug your vehicle in to avoid having the thermal temperature system drain the batteries to keep things cool.

Avoid overcharging your vehicle. It could help its performance by keeping it between 25 to 75 percent charge. Also, fast charging stations could strain the battery, causing it to degrade faster.

If you need to replace the battery in the Ford F-150 Lightning, then it could come at a pretty high price. However, the warranty provides pretty good coverage, and significant issues haven’t emerged.

How many recalls does the F-150 Lightning have? 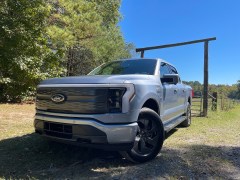 Improper airbag deployment increases the risk of shrapnel, and some of the wheel lug nuts may have been improperly tightened, causing the wheel to separate from the vehicle. Plus, the drive shaft may fracture, resulting in the loss of power.

Something is up with the steering wiring that may cause the wheel to turn in unintended directions, the trail brakes may fail, and there’s another driveshaft issue.

These problems seem to be related to electrical issues and manufacturing problems. The Lightning has racked up 95 complaints related to these issues.

Perhaps these problems will be solved by the time the 2023 Ford F-150 Lightning hits the streets. But we have to wait a little longer for an official reliability ranking.