It looks like the new truck will be called the Ram 1500 REV, according to CarBuzz.com. Though the name doesn’t tell us a lot, it tells us a lot. Since the new truck will be a 1500, that means that it should be the same size as the current half-ton pickups you can buy from Ram. So, that means Ram is going right at the F-150 Lightning and the upcoming Chevy Silverado EV and the GMC Sierra EV.

The REV name isn’t much of a surprise. For months the company has pushed the Ram Revolution marketing campaign. That campaign has been interesting, but stymied by a lack of information to compare the new Ram to other trucks.

We did get a recent glimpse of the REV, in clay

Auto designers often sculpt their designs in clay before they start making body panels from metal. If you pause the new Ram video at the 0:50 mark, you can get a pretty good idea of what the new Ram 1500 Revolution will look like. Well, if you squint, that is. It’s rendered in brown clay and while you can see the general shape of the truck, the hard lines are invisible.

Overall, the Revolution electric truck model seems to follow other EV Trucks like the Ford F-150 Lightning and GMC Sierra EV school of thought: make an electric truck look like a truck. That’s in stark contrast to the Tesla Cybertruck, which looks like a giant stainless steel origami project. On the Ram, you can see a hint of a Ram grille, but it has a high bumper and a sleeker cab. It’s clearly a four-door pickup with what looks like a standard, or 5.7-foot, bed.

The new truck will debut on January 5, 2023, at the Consumer Electronics Show, or CES, in Las Vegas. CES is the world’s largest computer and tech gadget show, but automakers have been using the show’s massive platform for several years to show off new features and new vehicles. Electric cars, which keep with CES’s theme, gain a lot of interest at the show.

CES recently confirmed that the CEO of Stellantis, which owns Ram and Dodge, Carlos Tavares, will give a keynote speech at CES.

Ram’s CEO has high hopes, and big promises, for the new truck 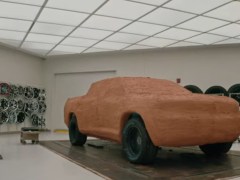 What Does the New Ram Electric Truck Look Like? Get a Glimpse in Ram’s Latest Video

Ram’s CEO, Mike Koval Jr., now says the new Ram EV pickup prioritizes towing, hauling, and other core truck attributes. Koval said that his message with the new Ram EV truck will be that “Trucks still need to do truck things,” as reported by the Detroit Free Press. He said that the new truck’s baseline range needs to be 300 to 350 miles. Ram is keeping those goals in mind as it develops the new truck, which was announced last spring.

The new truck should debut in 2023 under the REV name. But, you still can’t order one. While Ford has more than 200,000 reservations for the Lightning, Chevy has 140,000 for its new Silverado EV truck. Many new EV truck buyers have already decided on one of those, and the new Ram will have to bring a lot to the table to be competitive.