With a bold 1970s Sci Fi intro, Ram introduced the new Ram Revolution BEV Concept truck. The Ram is the new all-electric truck from Ram and it sounds like it will not only take on the Ford F-150 Lightning and the Chevrolet Silverado EV, but also the Rivian R1T truck. The new truck promises suicide doors, fast charging, an 18-foot-long bed, and all-wheel drive thanks to (at least) two electric motors. What else did the Concept reveal to us about the 2024 Ram Revolution truck?

The Ram Revolution Reveal was on YouTube and at CES

In an interesting move, Ram decided The Ram Revolution debut would be at the Consumer Electronics Show in Las Vegas, instead of at an auto show. But, CES makes sense in some ways because that’s where tech heads go to see the latest electronic gadgets and tools. You can watch the official release commercial on Ram’s YouTube channel.

But that doesn’t mean that Ram shared specs. Instead, the truck that Ram debuted at CES is a concept truck, and not all of the features of concept vehicles make it to the finished product. But it will be close. And, not surprisingly, it looks a lot like the handful of early pre-production images that Ram released this spring.

Outside, it looks like a Tron version of a muscle truck

The Ram Revolution truck from the front end has several interlocking LED lights that give it the look of something that should be whooshing by in a Tron film. It also has unique taillights and a red illuminated Ram script on the tailgate. But it also has the Coke-bottle look with the pinched middle and wide wheel arches that made muscle cars look so cool.

The roof, like the original Acura NSX, is two-tone, which both visually lowers the truck but it also gives it the look of an F-18 fighter plane. That look is highlighted by the giant wheels. The concept has some wild aspects, like its 24-inch wheels with 35-inch tires. The Silverado EV RSV, too, has 24-inch wheels.

The bed has a trick tailgate that can open either like barn doors or flat like a traditional truck’s tailgate. Like the Silverado EV, the Ram Revolution has a midgate that can open, extending the bed to about 18 feet when all the configurable jump seats are folded inside the truck. That’s a trick feature that other concept vehicles have tried, but that has not yet made it to production.

Inside, the truck has several new mind-blowing features

The first thing you notice when you look at the concept is the lack of a B pillar and the suicide doors that open wide. The rear doors are hinged at the back, which means you can open up all four doors and expose a flat load floor inside. Each of the seats are on tracks that allow them to slide forward and backward. While it looks like a four-seater, there are two additional jump seats attached to the midgate, which means that with two front seats, and a three-person bench seat, seven people could ride in the new Ram Revolution.

The steering wheel is oval. It still looks cool like a Tesla yoke, but it’s actually useful. It has two 14-inch screens that can move. The bottom screen is removable, too, like a tablet. But, unlike other Ram trucks, there’s a distinct lack of knobs, which will disappoint some (ahem) current Ram owners.

Also, like a Tesla, the concept doesn’t have a traditional speedometer or gauge cluster. The Leather on the gets made from apple byproducts. Recycled rubber and cork covers the floor.

The technical details, however, are still scarce 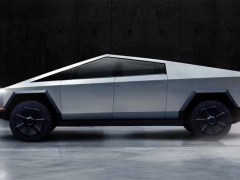 Which Electric Truck Would You Buy? It Depends on How Old You Are.

The Ram Revolution, so far, is only a concept. While Ram has made significant promises about the truck’s capability, it didn’t share many specs yet. It should have a 500-mile range. Unlike the GM trucks that are built on a skateboard-like platform, this truck has a traditional frame and a skateboard to hold the batteries and motors. It does have four-wheel steering, and the rear wheels have 15 degrees of rear-wheel steering.

Ram decided to keep power and torque figures, the final range numbers, and the battery capacity a secret. But, it does have the latest 800-volt DC fast-charging capability, which Ram says gives it 100 miles of range in 10 minutes of charging.

The price has not been released however the F-150 Lighting starts at $57,000. The first versions of the Silverado will start at about $75,000, however Chevy has promised a work truck version that should start at about $40,000. The Silverado EV in Denali First Edition trim starts at $107,000. So, if Ram prices it to compete with the other EV trucks on the market, it should be quite expensive.