Ford of New Zealand has announced that it will be selling a new Ford Ranger-based SUV called the Ford Everest Wildtrak. Come on, Ford, we want one here, too! A smaller rough-and-tumble SUV with a rear four-wheel drive and a 3.0-liter diesel? It sounds perfect, Ford.

Ford turned the Ranger into the Everest Wildtrak SUV

For 2024 we will get a new Ford Ranger pickup truck in the U.S. The new truck should be more capable, more powerful, and likely more fun when it debuts here in mid 2023. In New Zealand, though, the Ranger is getting SUV-ized into the Everest Wildtrak.

The new Everest SUV will be based on the new Ranger and is essentially an SUV with Ranger mechanicals underneath. It even has three rows of seating! sounds perfect, right? In Australia, the all-new 2024 Everest already has thousands of orders, according to Car Expert.

What is a Ford Everest?

Ford sells the Everest SUV in Asia, the Middle East, Australia and parts of the Pacific. We can’t get one here. Many Everest’s are right-hand drive SUVs, but they all seat five and have many of the same features, like SYNC, that Ford’s American offerings get. The Everest Wildtrak is a special version that gets 20-inch alloy wheels, a new H-bar and grille, and fender vents.

What can we expect from the 2024 Ford Ranger? 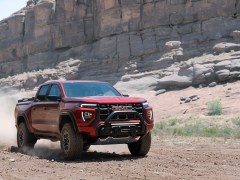 Is the new 2023 Ford Ranger vs. GMC Canyon Battle About to Get Real?

A lot of us are looking forward to the next generation of Ford Ranger. The new truck will have a 2.3-liter turbocharged four-cylinder, and possibly the diesel from the Everest. The current truck has the 2.3-liter with 270 horsepower and it gives the Ranger enough power to do most of the small truck stuff you’d expect.

The big difference should be inside. The new Ranger gets a large vertical screen and a digital gauge cluster. Ford will likely offer Apple CarPlay and Android Auto, as well as an upgraded B&O stereo, like in the top trims of the F-150. The current truck, too, can tow up to 7,500 pounds. We expect the next generation of Ranger to tow about the same, and haul about the same. That’s plenty of towing capacity for a midsize truck, and it doesn’t step on the F-150’s capabilities.

The 2024 Ford Ranger Raptor snags all the headlines, however. Ford has Raptor-ized the Bronco SUV, and the Ranger version should also earn monstrous off-road cred. But, come on Ford, now that we’re getting the new truck, can’t we also get the new Everest SUV?