You can finally feast your eyes on the wild new Ram 1500 Revolution concept. We’ve been waiting a long time to see the electric Ram truck, but all we get is a look! We don’t have much information about the Ram Revolution aside from a few features, and one of them is currently illegal.

One of the potential Ram 1500 Revolution features is illegal

For example, Business Insider points out that it has an illegal feature. The Revolution has cameras instead of the traditional side mirrors. This is to reduce drag and make the truck more aerodynamic.

However, it’s illegal in the United States. Side-view cameras aren’t exactly banned, but every new vehicle sold in America is required to have side mirrors that display what’s beside and behind drivers.

But the side-view mirrors could go into safety testing by the United States Road Regulators soon. It’s possible that they could become illegal by the time the Ram EV comes out.

The Ram Revolution is really late

After waiting for the Ram 1500 Revolution to come out and provide competition for the Ford F-150 Lightning, we only have the concept. We expected more information to become available with the Ram Rev’s debut.

The electric Ram truck is expected to go into production in 2024. That means it could be a 2025 model. The Ford F-150 Lightning will have a second generation by then. Also, the Chevy Silverado EV has already been spotted in towing tests. It could beat the Ram EV to market.

Also, we haven’t seen the production model. The Ram Revolution concept isn’t the final design, and things may change before it enters production. Perhaps it will get regular side mirrors by 2025.

We can’t confidently determine if the Revolution is worth waiting for yet because we didn’t get any stats. Ram suggests that the Revolution will have more range, a higher towing capacity, a higher payload capacity, and faster charging times than rivals.

There is nothing to back up those claims right now. But the truck will need to tow over 11,000 lbs, and the Silverado EV claims to have a 400-mile range. Also, it is hard to speculate a price for a truck that’s so far away.

The Revolution is a bit gimmicky 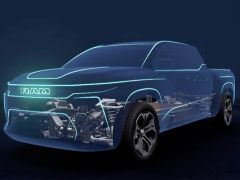 The Ram 1500 EV Is Coming With Big Promises to Deliver 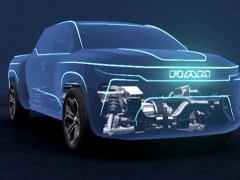 The Ram 1500 Revolution sports swing doors that open in opposite directions without a center bar. These designs are often used in concepts to provide a better view of the interior. They rarely make it to production because they could have less durability.

One of the infotainment screens can be moved from the center stack and used in other locations. So it’s a removable tablet? We hope it doesn’t have cheap parts that break easily. Also, what happens when someone drops it in a parking lot or accidentally loses it?

The Shadow mode allows the truck to follow someone and avoids obstacles. But Tesla vehicles can’t even tell if a driver is actually in the front seat. Also, an artificial intelligence face will be displayed to take commands?

We will need to see it to believe it because even the Jeep Grand Wagoneer came out with plenty of software bugs to address.

If all of the features from the concept make it to the production model, then the Ram Revolution could be pretty enticing and futuristic. But some of the features are pretty far-fetched, if not illegal.